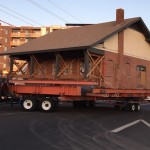 In some ways, it feels inevitable. You start talking about restoring a house that’s 114 years old and interesting facts and characters are going to climb out of every cracked wall. Put that house in the middle of one of the nation’s top 10 best arts districts, right here in downtown Phoenix, and it gets more interesting. Attach Kimber Lanning to the story, and things just start popping.

As it turns out, moving a house 129 feet is no small event.

To understand its significance, you start with the backstory.

It started in 1910 when a man named Felix Wurth left Kentucky. Speculation is that he did this either as the result of some kind of falling out with his family or due simply to an allergy problem (Kentucky is a very green state). When the move came to an end, Felix found himself in Phoenix, where he went to work for the post office and remained there for the next couple of decades.

In 1911, a year before Arizona became the 48th state in the Union, when the territory was just barely on the outside edge of what we now call “the old West,” Felix built a house — the very subject of this story — on the northeast side of 3rd St and Roosevelt.

Despite being just 1,100 square feet, Felix and his wife Mary, the brave souls they evidently were, raised six children in the red brick bungalow. Six. This was before the mainstream availability of air conditioners, mind you; the family spent the warm nights on the sleeping porch. Rumor has it that Felix also brewed his own beer. One can imagine he did this simply to cope with the situation. One of the Wurth’s children was Angela. As an adult, she married (thereby becoming Angela Ronan), and had several children of her own. One of those children was Bridget Ronan.

Bridget now lives in Prescott. Recently, she was kind enough to contribute her memories, by phone, of her time at the house.

“My oldest sister actually lived there with my mother when my father was off to war,” she says. (Her sister was an infant at the time.) “I was in college in downtown Phoenix, and I worked at American Fence Company, which, at the time, was located right next door to the home. I would go to school in the morning, and then I would — I was a ‘girl Friday’ for American Fence Company — then I’d come down and I’d go to work in the afternoon. I would go next door before I went to work and Grandma would always have lunch ready for me. […] Grandma was a phenomenal cook — just a phenomenal cook — so I’d go and report in to her and she would sit with me in the kitchen, having lunch spread out for me, and she’d always make me take a nap while she watched General Hospital before I’d go next door and go to work.”

After work each day, Bridget would go back over to the house to say goodbye. “And my uncle Joe lived there,” she says. “He never married. So he lived there even past the timeframe of grandma passing. And so he’d always be out on the front porch watching the world go by.”

Bridget, by the way, is full of Kentuckian congeniality and charm despite that she never lived there. When she says the words ”watching the world go by,” it’s as if she’s just finished a glass of lemonade on a hot day. It’s all Southern smoothness on ice, poured from a perspiring glass.

“That was just such a special time,” she says. In 1983, a man named Vic Armstrong bought the house to serve as the offices for his company, Armstrong Marketing. This change of hands made Bridget’s “Uncle Joe,” Felix’s eldest son, the last Wurth to own the house. When we refer to the house now as the “Joseph W. Wurth House,” this is why.

Later, the house went vacant. It stayed that way for a number of years, becoming a target for graffiti and general vandalism, and eventually having its windows boarded up to fend off squatters. As downtown Phoenix decayed into its darker, more haggard decades, the Wurth house, standing there alone and without any of its past family joy, went dark with it.

That’s when Kimber Lanning moved on to the row.

Kimber Lanning is a well-known woman in downtown Phoenix. She has long since formed deep roots there, steadily working with a small collection of other local business owners to preserve the history of the area and to simultaneously develop it into a booming arts district. She’s roughly five feet tall and basically unstoppable. The tiny force of nature she is, after dropping out of college at age 19 and opening the mainstay record store Stinkweeds, moved to the row to start her second business: a gallery called Modified Arts.

It was 1999. Downtown Phoenix was in rough shape. American Fence Company was long gone. First Friday, if it even had a name, was four people standing on a corner with a tourist map looking for art galleries that were spread far apart from each other. Kimber was determined to become one of them. When she moved in, she says, “There was just a hubcap shop and a liquor store.”

She pushed ahead with her plans anyway.

Modified Arts opened in an old building on the southeast side of 3rd Street and Roosevelt. Directly across the street from the Joseph W. Wurth house.

No one knew it at the time, but the future notion of Roosevelt Row had just been born, and the Wurth House story had just begun.