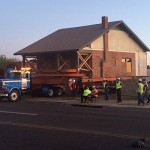 Read Part 1 and Part 2 of this series. The Wurth House in its original location, near the now leveled PAZ building.

The process involves putting the whole thing on jacks and raising it up a little each day. A little, it turns out, when you’re moving a historic house, is roughly 1/16th of an inch. Any faster and bricks can break, fireplaces can crumble, chimneys and walls and entire rooms can collapse. A house doesn’t move in a day. It could take as long to move as it did to build in the first place. But you can’t fake history, so you do the work. And John McCullough is a master. It was going to be a slow job, and it was going to cost Kimber a little over $40,000 of her own money.

It went on like that for a while. Today was never the day. Today, in fact, was about to get a lot further away.

Somewhere in the middle of the process, John’s lifetime of work caught up to him. He fell ill. When he did, he did it quickly, and with the same level of commitment it took to move his houses. Before Kimber knew what was happening, John McCullough had slipped into a coma.

She called John’s son every other day or so. She learned about John’s immediate family. She spent more time waiting. And hoping. And waiting some more. Is today the day John comes out of the coma?

While John’s life hung in limbo, the developer who now owned the land beneath the propped-up Wurth House was getting noticeably bothered. Sam Moyer called, too, with the same sense of urgency and frustration. “The real estate deal across the street was happening,” Kimber says, “and they were like, ‘You have to move that house. We can’t sign our deal until you get that house off that lot.’” The Moyers had trusted Kimber to handle the situation. The situation was not being handled. Each time a call came, all she could do was beg for another week. Making things worse, the press wanted to know what was happening to the house, but the developer had asked Kimber to sign an NDA restricting her from talking to the media.

The pressure for Kimber was coming from all sides, and the one man who could resolve everything was lying still and unreachable in a hospital bed.

“You’re just laying awake at night and thinking, I don’t know what the universe is doing right now,” says Kimber, “but I just have to freewheel it and wait and see.”

And then it worked. The waiting, the hoping, the lying awake. It worked. John McCullough came out of his coma. What happened next, appropriately, is something only Theodore Roosevelt, the street’s namesake, could have pulled off.

“That man, who is tough as nails,” says Kimber, “was back at work five days later.”

She’s as incredulous about it now as she likely was during his first day back at the job site. “He came out with a cane,” she says, “and he wasn’t able to stand for very long, but he was there, and he was leading his team.” John McCullough leading the Wurth House across the street.

Three weeks later, the story took a new turn, one that would start bringing the Wurths back together with the house their ancestor built.

It was June of 2015. Bridget Ronan (quoted in Part 1 of this series, daughter of Angela Ronan, who is the daughter of Felix Wurth, who built the house in 1911) had long since moved to Prescott. She had worked for APS there for 11 years, and was just six weeks from retirement. Part of her work, as is true for many people, involved routinely ignoring the internal newsletter that appeared in her email each day. “It wasn’t something I’d even peruse the outline of for what was being featured that day,” she says. “I normally didn’t do that.” She’d been ignoring it for years. There was no reason for June 18 to be any different.

“It just happened that that day I was just looking down that list of articles and saw it.”

There it was. A headline, a story, and a small photo of the house she remembered from childhood. The one where Uncle Joe sat on the porch watching the world go by. The one where her grandma made Bridget’s lunch every day before she went to work next door. She just happened to scroll through the newsletter on the one day it mentioned her family’s ancestral house.

“What in the world could they be doing with my grandma and grandpa’s house?” she wondered. To move a historic house, you must first move the not-so-historic power cables that hover in the air all around it. A fellow APS employee had been instrumental in working with Kimber Lanning on that effort, hence the mention in the newsletter. As soon as Bridget knew which coworker had been involved, she emailed her to say thank you. That coworker, Bridget guesses, then sent Bridget’s email to Kimber. Naturally, Kimber replied to Bridget to say she’d like to speak to her about the house.

Bridget retired from APS on July 31, 2015. A week later, she and two of her sisters drove to Phoenix and shook the hand of Kimber Lanning. And with that, a family, a house, a Roosevelt Row pioneer, and a fantastic string of stories all came together.

But it didn’t end there. It couldn’t. Five days later, the story took one more turn. And Kimber Lanning emailed Bridget Ronan to introduce her to a family member she never knew she had.

Read Part 4 of this series.