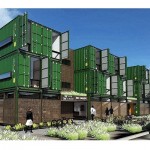 From the high seas to the Containers on Grand, shipping containers will soon find yet another home on the streets of Downtown Phoenix.

The Oscar, as it’s currently named, is the most recent shipping container residential project to be approved by the City of Phoenix, and is being engineered by the same firm that created the Containers on Grand, StarkJames.

Although still in the planning phase, The Oscar will be located on Portland and 2nd Streets, and is tentatively set to feature a mixture of ground floor retail and upper level residential units, according to StarkJames architect, Wesley James.

“Our goal is to make it convertible. So if we had a tenant that wanted to have, for instance, an art studio or office downstairs, we would be able to basically connect those two components,” he said.

Because the location is land owned by the city, the firm won the contract by responding to a request for proposal (RFP) from the city. They took their experience with the Containers on Grand project, and proposed a similar solution to the empty lot. Breaking ground is still a ways off, however, as the firm recently moved into the operating agreements phase with the City of Phoenix. If everything goes according to plan, James said they hope to complete this project near the end of next summer. Meanwhile on Grand Avenue, the Containers on Grand are well underway, with the interior framing and plumbing going in and the containers already on site. And, while the original eight units are still on track, the firm is already in talks with their development partners on a second phase of construction which would add an additional 12 units, if not more.

James noted that while they are maintaining a running list of interested renters, the needs of those who originally expressed interest may have changed in the time it’s taken to construct the units, which means there still might be an opportunity for those who want the experience of living in a shipping container. You can contact StarkJames to inquire about current availability here.