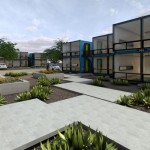 In most cities, lofts, high-rise apartments, and classic bungalows round out the options for urban dwellers looking for a place to call home. But as of today, only a handful of cities in the United States have attempted to deliver living spaces fashioned out of one of the most utilitarian devices in the world: overseas shipping containers.

As of this moment, eight decommissioned containers have completed a lifetime of work atop freighter ships and are heading toward the valley to be permanently transformed into functional apartments in the Containers on Grand complex, now under construction. This project was the collective dream of many people who couldn’t help but notice the incredible functionality of these containers and the success of a similar project in Washington, DC.

Although the final project will feature only eight rental units, each a one bedroom, investor Kathleen Santin and architect, builder, and partner in the project Brian Stark of StarkJames view this as a launching pad to larger scale container projects in the future.

“I think containers make a lot of sense on a bigger scale,” Brian said, but explained that it’s difficult to understand the costs on a bigger scale when you’re starting out with such a small project.

It’s easy to see the appeal of containers. Besides the impressive visual impact of containers as apartments, the containers themselves are fashioned out of incredibly strong Cor-Ten steel, which makes them much stronger and longer lasting than traditional buildings built out of wood.

And not only that, they are incredibly abundant. Shipping yards around the world are overflowing with unused containers, which are eventually melted down to the great detriment of the environment. Creating living spaces out of these containers seems to be an ideal answer to multiple pressing questions.

“The best thing you can do environmentally for something like these shipping containers, which will outlive any other material that people build with today, is to find some way to repurpose them,” Santin said. The containers for this project were purchased from a Long Beach shipping yard and were recently delivered to Phoenix. Not surprisingly, the eight initial units have all been spoken for. To test interest, Santin posted about the rentals on craigslist, and instantly received over 40 emails. This bodes well not just for the project itself, but the neighborhood the containers will inhabit on Grand Avenue. She envisions a walkable living area as the future of Grand Avenue, one that doesn’t just come alive for First Fridays.

Stark said he is hoping to have the project completed by March. Because the containers are built out of incredibly solid steel, the walls, roof, and flooring is already in place. His team is currently working on the foundation for the entire complex, followed by plumbing, kitchen and bathroom, and overall insulation once the containers are in place.

“Imagine on a boat where they’re stacked 8 tall. If you did that and occupied that, you don’t have to use other steel … your enclosure is the structure.”

Stark hopes that this is just the beginning for an entirely new type of living structure in Downtown Phoenix, as the novelty of the project presents a unique but not insurmountable learning curve with the City of Phoenix. And Santin believes this amazing building structure, the first of its kind in Phoenix, will usher in more adaptive city building code, and innovative new designs.

“They’re like legos,” she said. Who doesn’t want to live in a lego?

Check out floorplans and images of the containers here!