Shipping Containers in Phoenix Reflect a Sustainable and Versatile Culture 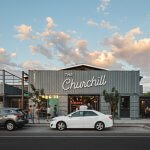 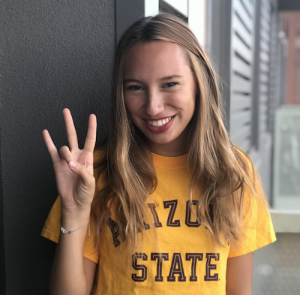 The opening of The Churchill marks the next wave of shipping container developments in downtown Phoenix.

An array of colorful boxes arranged side by side and stacked flawlessly on top of each other like a Lego set. Their contents are filled with 90 percent of everything we buy — cheap t-shirts, new television sets, breakfast cereal, coal and bananas.

Trading ocean for desert, Phoenix has become a new destination for some of these containers. Their new contents: families and businesses.

A downtown Phoenix architecture firm founded by Brian Stark, Local Studio, is on the forefront of turning to shipping containers as an innovative building material for new developments in the city. Inspired by similar projects across other major U.S. cities, the movement towards shipping containers and tiny homes has taken on a new life in downtown Phoenix with developments including Containers on Grand, The Oscar and The Churchill.

Turning 16 shipping containers into a fully residential eight-apartment unit on an old used car lot, Containers on Grand was the first of its kind on the West Coast.

The Oscar opened May 2017 on the intersection of Portland and Second streets with residential units on the second level and semi-commercial units through a partnership with a startup company, Wanderjaunt, on ground level.

These units and apartment units have been wildly successful and have attracted people from all over the world.

“We have tenants that are willing to not have covered parking, not have a gym and not have a pool to experience living in a container,” Santin said. “To our tenants a lot of the appeal is the sustainability of the containers and the fact that they are pioneers in a sense of the movement.”

“What people forget is that the shipping containers sitting at the ports get shipped up the coast to get melted which is a huge environmental assault,” Santin said.

While re-purposing the shipping containers is still not the best solution to the environmental problems these idle containers present, the adaptive re-use of the containers in transforming them into homes and businesses heightens the sustainability and energy efficiency of the containers.

“The highest utility bill that a tenant at Containers on Grand has had to date is $86 and he works at home and keeps his house frigid during the middle of the summer,” Santin said.

Beyond sustainability, the projects are unique in a multitude of other ways. “The neighborhoods have really embraced both projects,” Santin said. “It is something that is out of the box, something we and the city took a chance on, and it has worked out really well.”

That collaboration with the city is key to the success of any development of this nature because shipping containers simply aren’t a part of the city’s code.

Miguel Victor, downtown commercial infill team leader for the City of Phoenix, said the hardest part is that these projects here in Phoenix were among the first in the nation.

“It is really difficult for the developers to comply with our current building codes because a container wasn’t designed to be used as a habitable space,” Victor said.

Regardless of some of the difficulties, they are very appealing from an infill perspective. Shipping container projects are cheaper, built faster and more sustainable than most of the alternatives.

Victor said learning how to have these projects meet city codes is paving the way for making these developments more and more popular across Phoenix.

The opening of The Churchill on Sept. 1 marked the start of the next wave of shipping container developments in the Valley.

The third shipping container project in three years, the marketplace design is the first of its kind locally.

The marketplace is complete with a 30 foot vertical container sculpture by local Phoenix artist, Peter Deise. Pete Deise sculpture on southwest corner of The Churchill.

Duncan was inspired by similar projects in places like Austin and San Antonio. “I thought it was the best way to fit a large number of small businesses in a small space,” Duncan said.

The Churchill features popular names including Pedal Haus Brewery and State Forty Eight as well as an array of other eateries, retailers and boutiques.

“There’s a personal story attached to each of our tenant’s business concepts that make them part of Phoenix’s cultural fabric,” Rodie said. “We’re excited for the community to get to know them in this setting.”

As part of the lease agreement, tenants of the space participate in a system of social rent in which four hours of community service is obligatory every month.

“We wanted to do a community focused project with a social aspect,” Duncan said.

Duncan said they are hopeful about what this new development will do for the neighborhood.

“We really would like this place to become somewhere where the community feels they can come to hang out and bring cool, creative ideas and collaborate,” Duncan said. “We would like to make this kind of the place to be.”

Editor’s note: Santin’s partnership status has been corrected from the original version of this story.