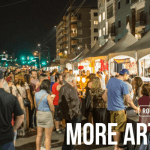 Roosevelt Row, the renowned arts district in the heart of Downtown Phoenix, announced an exciting expansion of First Fridays, one of the largest art walks in the nation featuring local artists and galleries, as well as street vendors and performing artists. Beginning on May 5th and continuing throughout 2017, Roosevelt Row, Artlink, Inc., and Phoenix Center for the Arts will collaborate on the expansion, which will be located between Second and Third Streets on Moreland Street, just north of Roosevelt. The event will feature a variety of live performance artists and interactive musical features for guests to create and enjoy. “Over the past decade, First Fridays have grown into a must-see event happening over multiple arts districts in downtown Phoenix with thousands of visitors every month looking to experience the unique sights and sounds our local artists bring to life,” said Vermon Pierre, Board President of the Roosevelt Row Community Development Corporation. “Roosevelt Row is an artists’ district that has grown into more than just Roosevelt Row, so we are incredibly excited to expand our district’s First Fridays celebration to Moreland Street to connect with the Phoenix Center for the Arts, Hance Park, Trunk Space at Grace Lutheran Church and our new residential neighbors in enHance and The Oscar. This block will feature local artists with musical, performance, culinary, and craft art.”

Plans for the Moreland Street expansion of Roosevelt Row’s First Fridays celebration include:

• Live performance art, which will include local musicians, performers, crafters, and culinary experts
• A beer garden at Phoenix Center for the Arts with unique and refreshing domestic and local beer and wine
• Musical features in which guests will be able to create their own music on site, supported by the collaborative new Community Music @ the Center program, presented by Phoenix Center for the Arts in association with ASU’s Herberger Institute for Design & the Arts.
• “Date Nite Child Drop-Off”, where parents can drop their children off at the Phoenix Center for the Arts for $25 and a 2.5 hour art class (6:00-8:30pm) before exploring First Friday
• Additional space for street vendors and local artists to display their products and works of art “First Fridays have always been the heart of the art community in Phoenix, and we are thrilled to add new features like the beer garden and Date Nite to this event,” said Lauren Henschen, Deputy Director of Phoenix Center for the Arts. “Kids will be able to ignite their creative senses in an art class at the Center, while their parents get the chance to explore First Fridays and enjoy live performances and displays at their own pace.”

Artlink, a non-profit organization committed to the growth of arts districts in Downtown Phoenix through events like First Fridays, will also be expanding their popular complimentary First Fridays trolley route to include a stop on Third Street and Moreland. The entire trolley route and a directory of First Fridays “Articipants” can be found on their website.

“Artlink has been proud to have witnessed First Fridays grow into a celebration of the arts throughout Downtown Phoenix and this expansion shows how vibrant the arts districts continue to be within our community,” said Catrina Kahler, Artlink Board President. “The wide variety of art, from galleries to performers to culinary artists, provides an attraction for every type of art aficionado. We’re looking forward to seeing Moreland Street come to life this Friday.” The first activation of Moreland Street for First Fridays will take place on Friday, May 5th, from 6-10pm. Additional artists, performances, and vendors will be added on the street for First Fridays throughout the rest of 2017. Proceeds from the event support both Roosevelt Row CDC and Phoenix Center for the Arts to expand arts programming and to create more opportunities for artists.

Residents and visitors to this new First Friday experience can visit the Facebook Event at bit.ly/ffmoreland.

Location: Between 2nd and 3rd Streets on Moreland Street in Roosevelt Row.