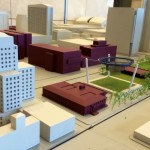 Visualizing a new building in a vacant lot sounds easy enough, but can you visualize how an entire downtown will evolve?

The Phoenix Community Alliance (PCA) hopes that a 3D model entitled Downtown Phoenix: Today and Tomorrow will help. What was originally created as a 400 square foot model by Arizona State University is being preserved and updated as a visual representation of ongoing downtown development. PCA President Don Keuth, had it modified to 10 by 16 feet, and updated it to represent both the city as it stands today and the proposed locations of future buildings. It currently represents 7th Street to 3rd Avenue, and the majority of downtown up to McDowell.

As many downtown residents know, vacant lots continue to blight the landscape, with many left wondering what’s to be done with these seemingly fabulous pieces of real estate. According to Don, this model will help visitors not only see how far we’ve come, but what the city has planned for those empty spaces.

Visitors will notice a landscape that looks similar to, but not exactly like, Downtown Phoenix, with existing buildings in an off-white color, while proposed buildings featured in a different color.

“The idea is to let people know that we have a plan for the dirt,” Keuth said. It can also be used to gauge how future projects fit into the urban landscape, which can be difficult to conceptualize.

The model is currently on display in the second floor lobby of CityScape. Keuth hopes it will aid the conversation for proposed buildings in the near future.