Dreaming Big at the DREAMRs

February 1 marked the 16th annual DREAMR (Downtown Revitalization Effort Awards of Merit and Recognition) awards program at the Phoenix Convention Center. Sure, it’s great to get a bunch of Downtown visionaries under one roof to recognize the important efforts each have made for Downtown to be what is it today. But, it’s truly best to honor a few of the individuals that have been around the longest, seen the most and fought the hardest. That’s where the DREAMRs come in. 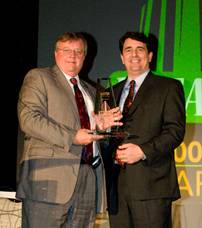 The DREAMRs “honor the individuals, projects and organizations that dare to dream and work to make those dreams come true.” That may sound a bit vague, but the basic premise of the awards luncheon, presented by the Downtown Phoenix Partnership, is to recognize those that have “cleaned up” Downtown — wiped away the blight and replaced it with shiny new buildings, commerce and business-minded tenants and retail space.

Downtown’s skyline is changing (now, to focus on mid-rise affordable living!), and that deserves to be recognized. Keynote speakers Kimber Lanning of Local First Arizona and Matt Lehrman of ShowUp.com both urged the attendees to support locally owned businesses and explore all the hidden gems that Downtown Phoenix has to offer. After hopefully inspiring the room, the awards presentations got underway. Here is a recap of the day’s winners.

Private Sector Individual: Mike Ratner. Ratner owns Tom’s Tavern, which has sat inauspiciously on Washington Street for 80 years. It has survived countless recessions, building booms and busts and many plans for the zero/zero block at Central and Washington, and it has survived because it gives combines elements so few places can — friendly service, comfortable atmosphere, quality food and good bargains. Ratner is hoping to see a spike in customers (and hours of operation) once CityScape‘s phases are up and rolling.

Public Sector/Non-Profit Individual: Don Keuth. Keuth is the President of the Phoenix Community Alliance, which is responsible for a number of private sector advances in Central Phoenix. In short, PCA has helped our skyline grow, our infill projects sprout up and our streets get clean. With Keuth at the helm, the advancement will surely continue. 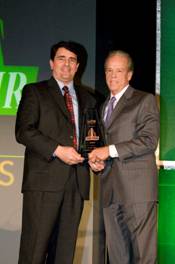 Organization: Phoenix Mercury. You can’t argue that the Mercury is our most consistent franchise. Don’t forget that they’re the ones hoisting the championship banners, not the Suns, D’Backs, Cardinals or Coyotes. The Mercury has experienced steady growth over its 13 seasons in the WNBA, and the success is apparent. There are few other markets that can draw the kind of WNBA crowds the Mercury consistently does.

Program/Project: Freeport McMoRan Center. It was once called Central Park East, but with Freeport McMoRan moving a bit north to occupy the new build project on Central and Van Buren, the glassy tower has established a true identity. Coupled with a forthcoming Westin business-class hotel, the building will further advance Downtown Phoenix’s business reputation.

“Unsung Hero”: Frank Fairbanks. Fairbanks saw more than his fair share of blight during his two-decade tenure as city manager. He accomplished so much, most notably helping to revitalize Downtown Phoenix with ASU’s Downtown campus, the Convention Center expansion and light rail implementation. It’s safe to say the city core is a better place thanks to all of Fairbanks’ efforts.

Visionary: R. Neil Irwin. Irwin, an attorney by day, is the only chairman in the Downtown Phoenix Partnership’s 20-year run, so his announcement to leave his post earlier this year is certainly a big deal. Irwin oversaw countless advancements in the organization and Downtown’s revitalization, earning the DREAMR’s highest honor.