Don Keuth Dedication to be Unveiled Outside City Hall 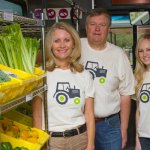 Mayor Greg Stanton along with the Discovery Triangle Development Corporation will unveil a special dedication to longtime community leader Don Keuth on Thursday outside City Hall. Keuth passed away in January at the age of 69. Keuth was renowned in Phoenix for his dedication to community initiatives, including serving as President and CEO of the Phoenix Community Alliance for 19 years and for founding the Discovery Triangle Development Corporation. Keuth had a particular passion for Fresh Express by Discovery Triangle, a popular mobile grocery store that he founded to provide fresh, affordable produce to citizens living in food deserts in Phoenix and Tempe.

The dedication event, open to the media and public, will take place at 8:30 a.m. Thursday, April 20th on the plaza of the Orpheum Theater, 203 W. Adams Street in Phoenix. In addition to Stanton and the Discovery Triangle Development Corporation, speakers will include a representative from the Phoenix Community Alliance, Arizona School for the Arts and the Arizona Community Foundation.

There will also be an announcement of the Don Keuth Memorial Fund to support Fresh Express by Discovery Triangle.