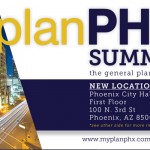 Saturday, November 15 is an important day for all Phoenicians as we get a sneak peek into the City’s draft General Plan Update, a document that upon review and approval by our elected officials and voters will impact how our city moves forward in the next ten years. For those of us who live, work, study, and play downtown, it’s a double dose of importance because one of the five key themes of the document is, drum roll please, “Create an Even More Vibrant Downtown.” So many who provided input – from all eight council districts over the past year and a half – concluded that a strong downtown is essential for a strong Phoenix, a strong region, and a strong Arizona.

So I urge you to mark your calendar and plan to attend the PlanPHX 2014 Summit, Saturday, November 15, from 10 a.m. to 2 p.m. at Phoenix City Hall, First Floor, 200 W. Washington St. Mayor Greg Stanton, Members of Council, city staff, and the PlanPHX Leadership Committee, comprised of several friends of DPI, including Mo Stein, Carol Poore, and Sandra Ferniza of PCA and Kimber Lanning of Local First Arizona, have planned a rigorous agenda and series of workshops for participants:

Prior to Saturday, spend some time reviewing supplemental planning documents that will work side-by-side with the General Plan Update document. What especially tickles your fancy or raises your eyebrows or causes you to lie awake at night? Only you will know unless you voice your opinion:

I understand that’s a lot of bullet points, and a lot of reading material behind each one of them, but they’re all so important to consider and act upon to help Phoenix gain its proper place among other major cities in the Western U.S., nationwide, and yes internationally.

During the past 18 months, I’ve had the pleasure of sitting down with hundreds of individuals and attending dozens of different neighborhood and community association meetings in the downtown core and surrounding neighborhoods. I’ve worked alongside a committed board, savvy community advisory committee, forward-thinking business leaders, dedicated city staff, and passionate citizen advocates, young and not-as-young. The heartfelt desire and dedication among every one of them to improve our city, warts and all, is staggering. There is untapped opportunity here, for native and newcomer.

With your continued advice and assistance, and a comprehensive and workable General Plan to guide us, we’ll achieve greater things, downtown and beyond.

See you on Saturday.