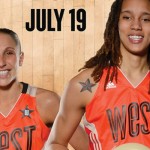 PHOENIX MERCURY TO HOST A FREE ALL-STAR FAN FEST AT CITYSCAPE IN DOWNTOWN PHOENIX ON FRIDAY, JULY 18
Fan Fest to include a surfing wave, giveaways and much more

As host of the Boost Mobile WNBA All-Star 2014 game, the Phoenix Mercury invites Valley residents and visitors to attend All-Star Fan Fest on Friday, July 18 at CityScape in downtown Phoenix, from 4 – 9 p.m. The event is free and open to the public.

Fans in attendance will enjoy appearances from Mercury and Suns entertainers, in addition to entertainment from live bands and special giveaways throughout the evening.

The Fan Fest will feature fun activities such as bounce houses and a sport court, and fans will have the chance to take a turn surfing on the Flow Rider, a large outdoor surfing wave.

Single-game tickets are still available for the Boost Mobile WNBA All-Star 2014 game. As part of the Mercury’s All Stars and Stripes program, the team will donate $1 for every All-Star Game ticket sold to local charities benefiting military heroes and their families. Tickets can be purchased at PhoenixMercury.com.