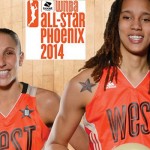 In anticipation of Boost Mobile WNBA All-Star 2014, the WNBA and the Phoenix Mercury will host a number of community and media events leading up to the big game.  All-Star events tipped off with a special unveiling of a new street sign on Tuesday, July 15, and will culminate with the All-Star Game on Saturday, July 19.

Boost Mobile WNBA All-Star 2014 – which will feature the most talented and dedicated women’s basketball players in the world – will broadcast live on ESPN on Saturday, July 19 at 12:30 p.m. PT from US Airways Center.  The 2014 game will mark the second time the All-Star Game will be hosted by the Phoenix Mercury.  The team also hosted the event in 2000.

In addition to the excitement on the court and in the community, the Mercury will make a special presentation and monetary donation to a local military organization during the All-Star Game.  The presentation and donation are part of the Mercury’s “All-Stars and Stripes” program, which benefits local military heroes and their families.  Fans can purchase tickets for the All-Star Game online by visiting phoenixmercury.com/allstar.

WNBA fans of all ages can get a sneak peek of the East and West WNBA All-Stars as they prepare for the big game during a pair of open and free-of-charge practices.  The East All-Stars are scheduled for 3-3:45 p.m. PT, while the West All-Stars are slated for 4:15-5 p.m. PT

As host of Boost Mobile WNBA All-Star 2014, the Phoenix Mercury invites Valley residents and visitors to attend All-Star Fan Fest.  Fans in attendance will enjoy appearances from Mercury and Suns entertainers, performances by live local bands, and special giveaways throughout the evening. The Fan Fest will feature family-friendly activities such as bounce houses, a sport court, and a Flow Rider, a large outdoor surfing wave.  The event is free and open to the public.

Fans are invited to see the world’s greatest female basketball players on one court for Boost Mobile WNBA All-Star 2014.  Individual tickets are still available and start at just $20.  For every All-Star Game ticket sold, the Mercury will donate $1 to its “All-Stars and Stripes” program benefiting local military heroes and their families.