The City Selects a Proposal for Central Station Site 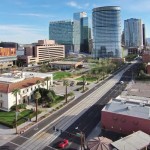 The City of Phoenix has taken a step forward on developing the Phoenix Central Station transit center site, a key downtown development area on Van Buren between 1st Ave and Central Ave. City staff recommended entering into negotiations with Smith Partners, LLC on their proposal for a mixed-use, high-rise apartment complex for the location. The RFP, which called for a “multi-modal, mixed-use, high-rise, transit-oriented development project,” was issued on December 24, 2013 with proposals due on February 24, 2014. By inviting development on this highly visible, strategic downtown site, the City is seeking to “further implement the strategic downtown vision, enhance the public transportation system, and maximize the return on the $4 billion in public and private capital that has been invested in downtown Phoenix over the past decade.”

“This is a prominent development site with tremendous opportunity, but it also presents some very complex challenges due to its physical location, transit facilities and operations, and legal and financial Federal Transit Administration requirements,” said Economic Development Program Manager Eric Johnson. “The City sought highly-qualified proposers, and was fortunate to receive two proposals considering the complexity, size and necessary resources needed to propose for such a project.”

The proposals were reviewed by a panel of 12 downtown stakeholders. After convening on March 4 and again on April 2, the panel proceeded to interview the two proposers on April 22 and determined their consensus scores, along with the strengths and weaknesses of each proposal.

A key element of the winning proposal was a Class A high-rise apartment building with 476 market rate studio, one and two bedroom apartments. Estimated monthly rents will range from $800 to $1600 per unit. The building will include a 24-hour doorman, concierge services, laundry and dry cleaning services, a fitness center, a media/theater room, a resort-style swimming pool and spa, an outdoor fireplace and indoor secure parking.

The proposed high-rise will be built to serve urban professionals and individuals seeking a full-service, highly secure living environment. The ground floor of the building proposal includes office space and a service component for the transit operations, and 24-hour flexible co-work space for start-up businesses.

DPJ will report back on the progress of this important development in a key downtown location.