A Proposed Future for the Historic Barrister Property 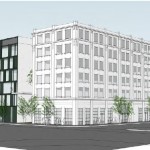 Last week, the City of Phoenix Community & Economic Development Department announced the results of the panel recommendation on proposals for the best use of the Barrister Building and adjoining property on the southeast corner of Central Ave. and Jefferson Street. Positioned just south of Cityscape and a block and a half west of US Airways Center, this key property sits along the proposed corridor for a light rail extension to south Phoenix and is a geographic linchpin between downtown and the warehouse district.

The Barrister Building, originally built in 1915 as the 125-room Jefferson Hotel, was famously featured in the opening scenes of Alfred Hitchcock’s classic 1960 film, Psycho (see the Phoenix sequence starting at 2:20. The Jefferson Hotel is featured at 2:50). Over the years, the now “Barrister” building was converted to office space. The City acquired the building in 1990 to use for office space and the Police Museum. It was registered as a Phoenix History property in 2005, and in 2010 the City relocated operations and prepared the building for long-term inactivity.

Because of the historic designation of the building and its pivotal location, there were three primary contexts that developers needed to consider in their proposals: historic preservation, public transit, and city plans and ordinances. Ultimately the development parameters included eight specific criteria, and four “additional considerations.” Complete details can be found in the full RFP.

The RFP for this property was issued on April 25, 2014 and the deadline for proposals was July 7. Three separate public meetings in May, and a final public meeting on June 27 enabled proposers to tour the property and City staff to answer questions and explain criteria. Ultimately, six eligible proposals were considered by the seven member review panel that included four City staff and three members of the public. It was heartening to see that several of the proposers were downtown neighbors: integral, local participants in the ongoing creation of a more vibrant downtown.

How are the panels for these RFP’s formed? “With the continued growth of our downtown neighborhoods and increased interest in city projects, the city has taken steps to increase the transparency of our process and involvement of community members over the last year,” CEDD staff explained. “In forming the evaluation panel, the city carefully considers several factors unique to each property and the adopted evaluation criteria for the RFP. For this RFP, the city staff on the panel included representatives of the departments that purchased and own the property, along with specialists in historic preservation and development.”

Panel members met three times to discuss how well each proposal met the criteria and the top three proposers were invited to present to the panel in person. This gave both the proposers and the panel members a chance to discuss the highest scoring proposals in greater depth. In the end, a consensus was reached and the panel recommended accepting the PB Bell/Davis Enterprises Collaboration proposal for an adaptive reuse renovation of the Barrister Building and the addition of two new buildings to create a residential/retail “urban composition” that combines historic preservation, residential density, walkability, and small business site opportunities with a practical, sustainable business model.

The PB Bell/Davis Enterprises Collaboration aligns two longtime, family-owned investment and development companies in Phoenix. Davis Enterprises has been investing and developing in Arizona since 1948 and is currently being managed by the third generation. Davis’ expertise is in retail and commercial office space, with the emphasis primarily on high density infill redevelopment and multi-tenant space. PB Bell Companies was founded by Phil Bell in the mid-70’s with a goal of becoming a leader in the multifamily acquisitions, development and property management industry. Similar to Davis, PB Bell has only acquired and developed real estate in the greater Phoenix metropolitan area.

What are the next steps? Again, according to CEDD staff, “City staff will review the panel recommendation and begin negotiations with the developer. If mutually agreeable terms are reached, a Letter of Intent will be signed and those terms will be presented to City Council for approval. Council approval is typically a two-step process, going first to Subcommittee for approval, and then to a Formal Council meeting for a final approval.”

In cases like this, where the City owns the property and seeks proposals that best embody City development priorities, the RFP process is an excellent mechanism for getting diverse and engaged responses that address those priorities in detail. Some plans may be bold and dazzling, but leave critical questions unanswered, while others may seem less imaginative, but answer the criteria with specific and thorough detail. In the end, it is up to the panel to wade through the pros and cons of each proposal to arrive at a consensus that offers the best opportunity to achieve a workable, desirable project that will provide a long-term benefit to the area.

As Eric Johnson of CEDD puts it, “The city is looking for every project to be successful, especially when they involve city property through the RFP process.  There are many variables that impact the viability of projects and, in the end, it is the proposers who must demonstrate the viability of their projects through the proposal process and balance the risk of the project based on the financial, commercial and real estate markets.”

We’ll keep our eyes on this project as it moves ahead through the process and keep you up-to-date on the progress of this important corner of downtown.

Details at a Glance:

Proposers (for specific details on each proposal, contact CEDD):