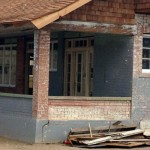 Last year, a conflicted, but deeply engaged community process led to a City Council recommendation of approval for a proposal from Roosevelt Housing Associates (RHA) for “The Row,” a mixed-use development that included new residential buildings and the renovation of the historic L.G. Knipe House.

Over the ensuing months the developers experienced a setback when they learned they would not receive tax credits for the residential part of their project. As they looked for alternative development strategies, they were charged with beginning work on the renovation of the Knipe House. The work needed to commence by end of year, 2014, or the development agreement with the city would be terminated.

As of late yesterday afternoon, DPJ received word from Scott Sumners, Deputy Economic Development Director for the City of Phoenix that the City and RHA had agreed to mutually terminate the agreement. The information came in the form of an email to Kevin Rille, President of the Evans Churchill Community Association. The ECCA group had provided leadership and outreach for community engagement with the RFP process for this parcel of land, and had written a letter of support for the project months earlier.

We’ve opted to print the email whole, so that no questions are left unanswered.

I’m writing with an update on The Row, the mixed-use project on 2nd Street including the historic L.G. Knipe House approved by our City Council earlier this year.  We appreciate Evans Churchill’s participation throughout this process, and your leadership on this key project.

From the start, the preservation and adaptive re-use of the Knipe House has been of paramount importance to the City.  Throughout the year, we have remained hopeful that RHA would commence renovations on the historic building before the end of the year, as required in our development agreement.  RHA had a setback in June, when they learned that the residential part of their project would not receive tax credits.  RHA was committed to this project, and took the initiative to explore alternative development strategies that would allow their project to continue.

In recent discussions, the City and RHA acknowledged that RHA will not be commencing renovations on the Knipe House by the end of the year, and we have mutually agreed to terminate our development agreement.  While The Row  will not be built on this site, we remain supportive of RHA, confident that the market demand for their product will remain strong, and respectful of their success in neighboring cities, with award-winning projects that enjoy 100% occupancy and waiting lists.

We look forward to working with Evans Churchill on a new plan for the Knipe House and the surrounding City property.  I hope to meet with you in early 2015 to discuss this further.

Thank you again for your support and leadership.

We contacted Sumners to suss out next possible steps with regards to this parcel. “We don’t really know what the next steps will be yet,” he said. “Our biggest concern is that building,” he continued, referring to the preservation of the Knipe House. “We want to get something viable in the building and protect it.”

The building was broken into and set on fire over a year ago, which resulted in major damage. Sumners mentioned that on December 23 this year, a community member alerted them that someone had once again tried to break into the Knipe House. They were able to send workers out to fix the damage and board up the house again, but it highlights the vulnerability of the building.

With the preservation of this building as the key driver, Sumner hopes that a consensus can be reached among neighbors, the city and other stakeholders on how to both preserve a piece of our history and add life and business to the area.