Wire | Live in the City Placemaking Panel Heads to the Vig 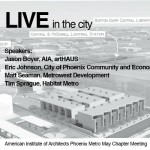 The May Placemaking series from AIA Phoenix Metro seeks a wide audience to continue elevating the dialogue on design, architecture and development in our City. Head to the VIG on Fillmore, which was chosen because its location positively contributes to the sense of Placemaking in the Roosevelt District. And stay tuned for sessions over the summer that will focus on the themes of “SHOP, MOVE, WORK, and ENGAGE.”

What: “Live in the City” AIA Phoenix Metro May Chapter Meeting Placemaking Series