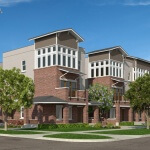 That’s why the downtown Phoenix resident and principal of Metrowest Development is involved in buying up and developing vacant lots in the hip, historic “SoRo” area, located south of Roosevelt Street.

The former Roosevelt neighborhood association president says the projects he and partner Doug Gannett are developing in the area are a way of “stitching the neighborhood together” with attractive, new residential offerings that aim to be responsive to the historic character of the area.

McKinley Row, a for sale residential project on the Northwest corner of Fourth Avenue and McKinley Street, is Metrowest Development’s latest effort under construction. Heavy equipment is currently digging the trenches for the foundations. When it is completed in May or June of 2017, benefits for the area will include more cooling shade trees, grassy areas, and residents to support restaurants and retail, Seaman explains. The project will include 18 single-family attached townhomes with two bedrooms, two-and-a-half bathrooms, a two-car garage, and a ground-floor home office with prices starting at $399,000. Master bedrooms will feature 14-foot vaulted ceilings. Home owner association fees will be about $180 per month including maintenance of common areas, buildings, and grounds.

The townhomes will offer luxury finishes, such as top-of-the-line appliances, quartz countertops, plank flooring, and front porches in keeping with many homes in the Roosevelt historic neighborhood, Seaman says. Porches encourage neighbors to interact and get to know one another better, he adds, offering something different than typical suburban development.

Seaman describes the Roosevelt neighborhood as “one of the most desirable Downtown neighborhoods in Phoenix” for amenities including a variety of housing options, walkability, proximity to Arizona State University, parks, and new restaurants and retail offerings. Metrowest Development’s previously completed project in the area, Townhomes on 3rd, sold out in the fall of 2015. McKinley Row is already over 25 percent sold, with pre-construction pricing ending soon, Seaman adds.

Another Metrowest Development project, The Union@Roosevelt, located on Roosevelt and First Avenue on the light rail corridor, is expected to be completed in December, Seaman says. It includes 80 apartments with ground floor retail and restaurant offerings. Before that project got underway, Seaman says, the site had been vacant for more than 50 years. Last summer, the Phoenix City Council approved entering into a development agreement with Metrowest Development, soon to be finalized, that will pave the way for another new residential development on vacant land located along McKinley Street between Second and Third avenues, Seaman says. This will include a mix of around 90-100 apartments, condominiums, and townhomes, he notes.

And if that isn’t enough, Metrowest Development is also part of the team, led by The Trammell Crow Company, that the City of Phoenix recently selected to buy and redevelop land on West Fillmore Street between Fourth and Sixth avenues.

In addition, Metrowest Development has been involved in a number of historic preservation projects in the Roosevelt neighborhood.

Seaman says he and his partner are proud of becoming known as the Roosevelt area’s “neighborhood developer,” who does small historic preservation projects as well as larger residential projects, and they are committed to the area’s prosperity over the long-term.