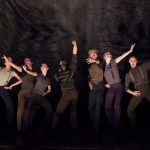 Ballet Arizona’s Masters of Movement should require seat belts for audience and dancers alike due to its sheer exhilaration. Each of the program’s three ballets reveals a completely different side of the troupe while reinforcing the company’s burgeoning reputation for excellence, athleticism, and technical accuracy.

At the Orpheum Theatre through Sunday, March 30, the show opens with the oldest work, Artistic Director Ib Andersen’s visually and aurally satisfying Indigo Rhapsody. Dressed in simple, clean shades of indigo edging toward black, the dancers deftly balance sensual fluidity against carefully timed rigidity in ensemble movements as well as a pas de deux featuring Jillian Barrell and the sleek, distinctive style of Astrit Zejnati. “It’s sort of a moody thing,” says Andersen. “The lighting is at times quite stark.”

“But the music is like that too…a lot of different moods or textures,” he adds, describing Sergei Rachmaninoff’s beloved Rhapsody on a Theme of Paganini. The work includes an introduction, theme, and 24 variations, the most familiar of which is the sumptuous variation 18, famous from the movie Somewhere in Time. “It embodies Rachmaninoff’s late style at its brilliant and witty best, it has one of the world’s irresistible melodies…I envy anyone hearing it for the first time,” wrote classical music annotator Michael Steinberg. Andersen began creating Indigo Rhapsody in 2001. “It was actually 9/11…that was…the first day,” he recalls, explaining that the timing was sheer coincidence. “The week I choreographed it everything was of course filled with 9/11, so in some ways I think I was influenced by that…the mood. It was so severe, you know?”

The show’s atmosphere changes after the dark, flowing loveliness of Indigo Rhapsody. If you enjoyed Alejandro Cerrudo’s Off Screen when it was last performed by Ballet Arizona a few years ago, here’s the good news: this time around it’s even better, possibly due to the savvy casting. Count yourself particularly lucky at the evening performances, which feature seven talented dancers pulled from the troupe’s top ranks to form a tight ensemble.

Tzu-Chia Huang and Paola Hartley, who both excel in classical story ballets, have the opportunity to demonstrate their considerable skill and flexibility off pointe, along with the always-magnificent Kenna Draxton. Eric White and Junxiong Zhao execute a beautifully synchronized vaudevillian interlude, and there’s plenty of comic relief from Nayon Iovino and Myles Lavallee.

Costumes designed by Branimira Ivanova — a frequent collaborator with Hubbard Street Dance Chicago — evoke early 20th-century working-class garb, augmented with purple gloves and suspenders. The minimalist scenery consists of two immense pieces of black fabric, one backed with silver and alternately used as a sort of movie-screen backdrop, a billowing floor covering, and a means of hiding dancers from view or whisking them offstage. With its period flavor and film music from There Will Be Blood, Syriana, Punch-Drunk Love, The Triplets of Belleville, The Village, and Pan’s Labyrinth, Cerrudo’s work is uniquely suited to the intimate, venerable setting of the Orpheum Theatre. Says Andersen, “Mostly I like his sense of humor, and…his movement is very sensual. You know, talent…” He pauses to laugh. “Being as old as I am, and having seen as much…you know when it’s good, and it’s not always something you can pinpoint…” Andersen continues, “It’s something with the choreography, how they relate to music, how they use the space…it’s all these things and then…how you react to it.”

The 33-year-old classically trained Cerrudo was born in Madrid and became Hubbard Street’s resident choreographer in 2009, winning awards and working with the Chicago Symphony Orchestra, Nederlands Dans Theater, and Pacific Northwest Ballet. Ballet Arizona first performed Off Screen in 2011, and last spring commissioned Second to Last, which appeared again during the company’s September Ballet Under the Stars outdoor performances. Finally, those who love on-pointe “tutu” works will find their hearts’ desire in Symphonie Classique, Andersen’s homage to the roots of classical ballet. “I would say I’m inspired by the French school, meaning Paris Opéra Ballet,” he says, “their way of articulating and their musicality…also their schooling. In my opinion it’s the best school…it’s also the oldest school.”

Paris Opéra Ballet was established by King Louis XIV as the Académie Royale de Danse in 1661. “The Paris Opera came first,” Andersen explains. “Danish style actually comes from Paris Opera…and I would say Russian almost comes from the Danish — I mean, the famous choreographer in Russian ballet was a Frenchman, Petipa. It all comes from France — ballet technique comes from France.”

“When I grew up, and just 30 years ago, even 20 years ago, it used to be more distinct,” he adds. “Nowadays, of course, you see the same thing done everywhere. There’s not much distinction between what they do in Moscow and what they do in Phoenix, Arizona.” Andersen chuckles. “It’s like the rest of the world, you know? It’s smaller and smaller — we wear the same clothes, we eat the same food…. So I’m trying to go back a little bit.”

Symphonie Classique is filled with sparkling black velvet and silver tulle, the creations of Martin Pakledinaz, a Tony Award-winning costume designer known for his work on Broadway and in opera and ballet, especially with choreographer Mark Morris. Pakledinaz died of brain cancer in July 2012 shortly after fashioning Ballet Arizona’s costumes. Andersen used the irresistible music of Sergei Prokofiev’s “Classical” Symphony, written by the young composer in 1917 but emulating Haydn and musically referring to the earlier Classical and Baroque periods. “It’s a very, very difficult ballet technically,” he continues, “because it’s fast, but also…it’s demanding…they need to do a lot of things in a short amount of time, and also it’s very precise.”

“I do think that the company’s evolving for the better,” says Andersen, who enjoys all the advantages of his troupe’s spacious new home on Washington Street. “Everything has changed — the sense of how it feels to work. We have room now to actually move and also to see…the dancers are so much more focused. It’s a very great improvement.”