Beyond Walls: Ballet Arizona Escapes to the Desert 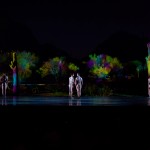 Symphony Hall and the Orpheum Theatre are Ballet Arizona’s usual performance spaces, firmly in the heart of downtown. Occasionally, however, the troupe ventures outdoors for its free annual Ballet Under the Stars community performances and, for the second year, Topia at Desert Botanical Garden.

“The lighting and staging are better this year,” says Artistic Director Ib Andersen, a Balanchine protégé known for his appealing choreography. He created Topia last spring, crafting an instantly popular work on a large-scale outdoor stage for a production completely unique to the Valley’s environment.

Unusual aspects of Topia come from not only the open-air surroundings but also the sheer size of the endeavor. The 80-foot stage is considerably wider than Ballet Arizona’s typical indoor venues, generating logistical challenges of scale. It’s also set at ground level, a fundamental difference from the troupe’s elevated staging for Ballet Under the Stars.

“I wanted the dancers to be level with the audience and level with the desert,” describes Andersen, “so everything is a part of the ballet.” His concept incorporates the flora and fauna of the Garden in a show very specifically designed for its exact location.

Topia begins at sunset, even before the dancers take the stage, while shadows move across the Garden and change perspective on the looming Papago Buttes. As part of Andersen’s design, geological characteristics become integral to the ballet’s scenery. His lightweight, minimalist costumes also reflect the colors and textures of nature, although his original intention would have used far less fabric. “I wanted them [the dancers] to be naked,” Andersen explains, “but it’s impossible.” He laughs. “It’s distracting for the audience, and not practical.”

Andersen continues, “But the dancers aren’t complaining about the heat — they’re not too hot because they’re wearing so little.” The men wear flesh-tone briefs, while the female dancers are clad in gossamer tunics.

The music for Topia is nearly the entirety of Ludwig van Beethoven’s sixth symphony, the “Pastoral.” “Beethoven is difficult to choreograph,” says Andersen, “because it’s so complete on its own. It’s enough without the dancing.” He felt able to use Beethoven’s music, he explains, only because the Garden and the desert sky create such a vast, open backdrop, resulting in a production not constrained by walls or ceiling.