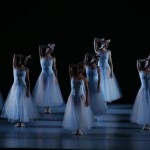 The authenticity and accuracy of Ballet Arizona’s All Balanchine program this weekend relies on the invaluable knowledge of Artistic Director Ib Andersen, himself a Balanchine protégé for whom the great choreographer created major roles in Ballade, Robert Schumann’s ‘Davidsbündlertänze,’ and Mozartiana. With a distinguished background in the Royal Danish Ballet and the New York City Ballet, Andersen now serves as one of only a few répétiteurs authorized to stage George Balanchine’s works. The program includes Serenade, set to music by Peter Tchaikovsky and the first work Balanchine choreographed for American dancers. The Balanchine Trust describes it as “a ballet of patterns that…explores academic ballet technique…the choreography, as the music, has overtones of love, loss, yearning.” Serenade’s glorious lighting, long translucent skirts, and stark staging are quite literally breathtaking when the curtain rises.

Ballet Arizona dancer Natalia Magnicaballi explains that Serenade’s unusual combination of classicism and drama began as exercises. “Balanchine started choreographing in class…and this girl came late, and he put that in the choreography.” The role continues with a waltz and later an elegy, where a relatively small movement provides striking visual contrast: the dancer unpins her hair. Magnicaballi demonstrates another position from a section of the elegy known as “Dark Angel,” sweeping her arms behind her head and extending them like outstretched wings. The pose was inspired by Antonio Canova’s 18th-century sculpture of Cupid and Psyche, according to Balanchine expert Suzanne Farrell, for whom Magnicaballi has danced since 1999.

“It’s very interesting for me,” says Magnicaballi, “because [Farrell and Andersen] both worked for Balanchine [in the 1980s], so I have the female…and the male…so it makes sense how they ask for things.” She pauses thoughtfully. “They’re very different in personality, but I think that they complement each other.”

Magnicaballi joined Ballet Arizona in 2002 after working with the Italian company Aterballetto and Julio Bocca’s Ballet Argentino in her home country. She’s particularly beloved by Arizona audiences from lead roles in La Sonnambula (The Sleepwalker), Coppélia, and Swan Lake as well as Ib Andersen’s creations.

The dancer tore her anterior cruciate ligament (ACL) in January 2011 — “it totally went tukk,” she describes, accompanying the sound with a twisting, tearing motion. She spent nearly a year recovering and retraining herself. “You have to teach yourself…how to walk again,” she continues. “But I always say things happen for a reason, because I came back stronger. I’m training different — I go to the gym, I lift weights, I do cross-training. It helped like a thousand percent.”

Magnicaballi’s recovery means a return to her signature roles. “I’m so happy to be dancing Movements again,” she exclaims. “It’s my favorite, favorite, favorite.” She’s referring to Movements for Piano and Orchestra, which is paired with Monumentum pro Gesualdo. Igor Stravinsky composed Movements and orchestrated Don Carlo Gesualdo’s madrigals for Monumentum, and pianist William Wolfram provides live music with conductor Timothy Russell and The Phoenix Symphony.

“I had the privilege to work with Suzanne [Farrell] on that,” continues Magnicaballi. “It was created for Diana Adams, and [she] found out that she was pregnant, so she had to rest and stay in bed. So Diana taught Suzanne the ballet in her living room…and she passed it to me, one-on-one…” She nods emphatically. “It’s very special for her, that ballet, and it is for me…I feel like home when I do it.” She describes Movements as “super-precise…you are constantly moving, and it has to have a certain connection in the way you partner, too. It’s very interesting how the tempo also changes.” Keeping track of the beats in Stravinsky’s music can also be challenging because of meter changes. “When the ballet’s very precise it makes so much sense…it’s like seeing music through the movement,” she says.

Magnicaballi’s perspective on Monumentum was influenced by the composer’s history. In 1590 Gesualdo arranged for the murder of his wife and her lover. “I know that,” says the dancer, “because Suzanne actually came with the story and said, ‘Can you believe this music is so beautiful, and so serene and calm?’”

She continues, “So all those ingredients make you think about how you want to feel and portray the ballet.” Magnicaballi explains that Balanchine’s choreography encourages a natural progression of movement from one balance point to the next. “It’s very rich,” she says, “and the language is very interesting.” The final work on the All Balanchine program, The Four Temperaments, offers a refreshing contrast. Paul Hindemith was commissioned to write the music by Balanchine in 1940, and it features a theme and variations named after the four personality characteristics of medieval cosmology: melancholic, sanguinic, phlegmatic, and choleric.

“I think what I like about Balanchine is…every single ballet is like you’re stepping into a completely different world,” says Magnicaballi. “We’re doing three different ballets, and I feel like a totally different person in each of them.” She smiles. “It’s so great to have that in a program as a dancer — it’s very fulfilling.”

After Ballet Arizona’s All-Balanchine performances end on May 5, the company moves to an outdoor stage at Desert Botanical Garden for three weeks of Topia, a work choreographed by Andersen using Beethoven’s “Pastoral” Symphony No. 6.