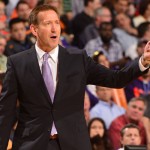 It is often said that NBA teams need to get through the first 20 games to really get a sense of who they are as a team and how they stack up against the rest of the league.

With a surprising 11 – 9 record, the Suns have far exceeded everyone’s expectations, including my own. They have played exciting, fast-paced basketball, leading the league in fast break points. The team has exhibited more defensive intensity than in recent memory and, from top to bottom, are playing extremely hard for coach Jeff Hornacek.

Hornacek, for his part, has pulled all the right strings with his lineups, overcoming early season injuries to Eric Bledsoe and Goran Dragic, in large part due to Gerald Green’s contributions starting in their place.  And even though arguably the team’s best player through the first quarter of the season has been Markieff Morris, Hornacek has kept him coming off the bench in tandem with twin brother Marcus, knowing that they thrive more on the court together than apart.

It will still be difficult for the Suns to make the playoffs in the brutal Western Conference. As their schedule gets more difficult, they will be hard pressed to keep their record above the .500 mark.

But, what we’ve learned about this team is that they will compete every game, will play hard for their coach, and will continue to be exciting to watch.  They are a group of players that are likable (and seem to like each other) and are easy to root for from a fan’s perspective.

While we can’t borrow a choice line from former Cardinals coach Dennis Green (“They are who we thought they were!”), at the quarter mark of the season we can say about this Suns team “They are who they are.” For Suns fans, we should be very encouraged by that, and excited to watch them the rest of the way.

The Gift of Hoop

Monday, Dec 23 vs. Lakers
“Season of Giving” Holiday Celebration for Suns/Lakers game
US Airways Center
5 – 7 p.m. (game is at 7:00 p.m.)
US Airways Center will be transformed into a winter wonderland prior to tip-off on Monday, December 23, with holiday decorations, crafts and more.