Suns Spot | It Hasn’t All Been Bad

With just four games remaining in the 2010-11 NBA season for the Phoenix Suns, let’s focus on some of the highlights from this past season. In a season as disappointing as this one has been, it’s hard to find anything to be positive about, but there is always something. Three really stood out for me.

This one is a no-brainer. This trade basically came out of nowhere and was quite the shocker. It didn’t take long before Suns fans were begging for Turkoglu to be traded, although no one thought that was really possible. And then we were hit with this. The Suns came up with a trade in which they moved a bad contract, received a quality and underused big, and they actually received a first-round draft pick.

Sure, it was tough losing Jason Richardson for whatever is left of Vince Carter, but the addition of Marcin Gortat was and will continue to be huge. Gortat gives the Suns something they’ve lacked since, well, basically forever. He’s a true center and an inside force. He plays solid defense, rebounds really well and has already developed a nice mid-range jumper.

This trade gave the Suns a center for the present and the future. Plus, the first-round pick that allowed them flexibility in the Aaron Brooks/Goran Dragic trade. Huge win for the Suns.

2. Marcin Gortat vs. the Boston Celtics

On January 28, Gortat had his coming out party in dominating fashion against the Boston Celtics. Sure, the Polish Hammer had already had a few solid games since joining Planet Orange, but this was on national TV against the beasts from the East.

In probably the best defensive performance of the year from Phoenix, Gortat led the way with a then career-high 19 points, 17 rebounds, one block and a plus/minus of +14 for the game. Heck, he even hit a three-pointer as the buzzer sounded to end the first half.

This ended up being just one of many double-doubles for Gortat, but for me it’s the most memorable, and it appears to be something Suns fans can get used. 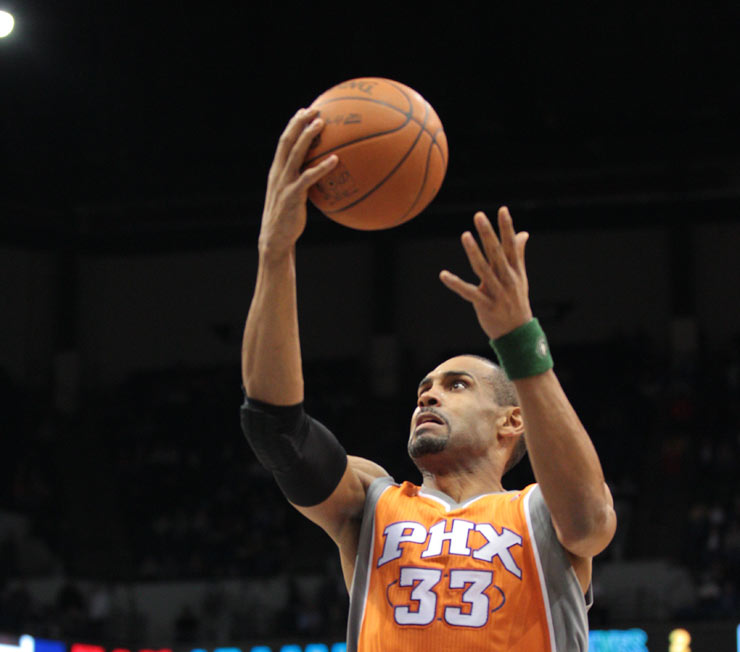 How is it possible that Grant Hill is 38 years old and playing on such a high level? Photo by Jordan Johnson/Getty Images.

Anytime Grant Hill does anything, we are reminded that he’s 38 years old. At a point, it gets a little ridiculous, but then you think about it. It is absolutely remarkable that Hill continues to perform the way he does night in and night out given his age and history with injuries.

Hill is finishing up his fourth year with the Suns, and somehow he has continued to get better and better, with this year being by far his best in my eyes. His numbers have remained basically the same with his rebounding taking a slight dip, but it’s the impact he has on his opponent’s stat line that’s so impressive.

Hill has gone from what I considered a slightly above-average defender to a great defender. Whether it be a point guard or power forward, night in and night out, Hill defends the opposing team’s best player and more often than not causes them to struggle mightily.

Kevin Durant, Kevin Martin and Monta Ellis are just a few of the big-name offensive players that have had awful nights when trying to score on Hill. Clippers rookie Blake Griffin has embarrassed the opposition all season long. When going against Phoenix, Griffin can be seen pouting around the perimeter.

At the very least, Hill should make the league’s All-Defensive Second Team, even though he probably deserves First. Alvin Gentry says it during every postgame press conference, and he’s right. Whether or not that will happen remains to be seen. Either way, it’s been a pleasure watching Hill shut offensive players down.

So, while this season has been a disappointment overall, it has had a few bright spots. The acquisitions of Gortat and Brooks should give the Suns some flexibility and options moving forward. I’ve still enjoyed this team, and I’m excited to see what improvements GM Lance Blanks and company can make over the summer.