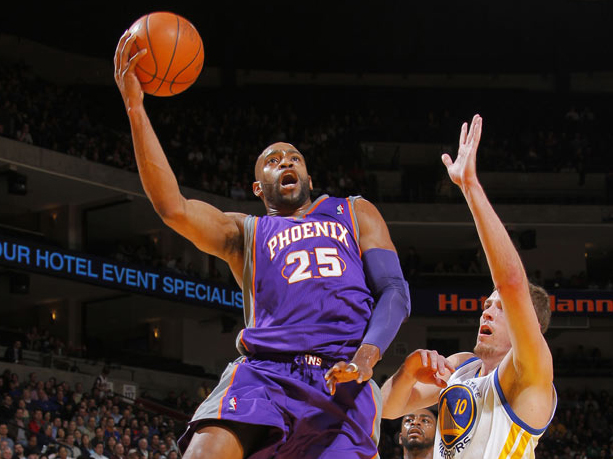 Any takers for VC's contract? Photo by Rocky Widner/NBAE via Getty Images.

Entering this weekend’s All-Star break the Phoenix Suns have a record of 27-27. A few weeks back, the goal was to reach .500 and Phoenix got there. However, they did blow a few games they should have won in doing so. Looking beyond the All-Star break, there are a few things I’d like to see happen over the course of the last 28 games of this season.

Vince Carter needs to be moved

Vince Carter was the worst part of an otherwise good trade with Orlando in December. The additions of Marcin Gortat and Mickael Pietrus were great, plus Phoenix shed Hedo Turkoglu’s bad contract while gaining a first-round draft pick. However, the Suns had to give up Jason Richardson for Carter.

I was willing to give Carter a chance, but he has failed to provide anything positive to the team. He’s basically had two good games, one that the Suns lost when he went ice cold in the fourth quarter. I appreciate that VC appears to be trying, but it’s just not working out. If his name weren’t Vince Carter, I don’t think he’d even be in the rotation currently. I’d prefer to see his minutes go to Pietrus or Jared Dudley, two guys that can contribute even when their shot isn’t falling.

The problem with moving Carter is that it’s unlikely anyone wants him and his bulky contract. It would have to be a team desperate to save money (there is a team option on Carter’s contract next season) and the Suns would more than likely be forced to take a bad contract back. At this point though, I’d move Carter for anything just to get him out of the rotation.

Robin Lopez has been forced to play better with the emergence of Gortat, and he has, but not nearly as well as Gortat. Lopez has had his moments, including 13 points and 13 rebounds last night, but he just needs to be more consistent.

Lopez has the talent. You can see it. In fact, I believe he has more potential and a higher ceiling than Gortat, he just needs to learn the game better and get the confidence to go out there every night and be a beast.

He seems to start well, especially offensively, so he just needs to keep it going. If Lopez can continue to improve and be a regular force, the Suns’ playoff chances and future in general will be a whole lot brighter.

Phoenix in the playoffs

Lastly, I’d like to see the Suns in the playoffs. It’s going to be tight finish to the end between six Western Conference teams fighting for the last four playoff spots, and the Suns certainly have a shot to snag one of those spots.

Sure, the Suns may not be able to make a deep run, but the playoff atmosphere is always exciting and I’d like to have that again this year. Even if the Suns can only manage to get the eighth spot, it would mean another playoff matchup with the Spurs, and those are always fun.

The Suns control their destiny against the Hornets and Jazz. The Nuggets will most likely drop out of the playoff hunt once they move Carmelo Anthony. The Blazers and Grizzlies will be tough to catch because they both own the tiebreaker over Phoenix, but the Suns only need to catch two teams.