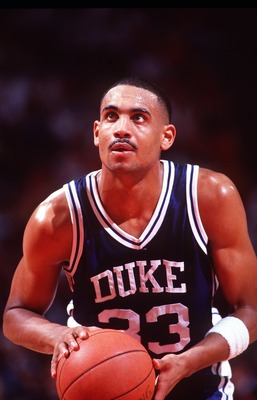 Grant Hill was one of Duke's all-time greatest players. Photo by Doug Pensinger/ALLSPORT

With the Phoenix Suns’ recent struggles eliminating them from playoff contention earlier in the week, I’ve decided to shift gears here at the Suns Spot. While most other bloggers around the Interweb are talking about ending the year on good note or looking ahead to what the summer may have in store, I’m taking a different route.

Anyone who knows me knows my two loves are the Suns and film. Fittingly enough, the Phoenix Suns are tied to a film that happened to have its world premiere last night in Scottsdale to kick off the 2011 Phoenix Film Festival. The film, Starting at the Finish Line: The Coach Buehler Story, is executive produced by none other than Suns small forward and former Duke super stud, Grant Hill.

Unfortunately, I wasn’t able to make it out to see the film, but it is generating good early buzz. The documentary focuses on the life of legendary Duke track coach, Al Buehler. Buehler has touched and inspired the lives of many world-famous athletes, such as Carl Lewis, Shane Battier and of course, Hill himself.

For 55 years, Buehler has been the face of Duke track and field. He has even had a huge impact in women’s athletics as well, helping break gender barriers in the sport. Unfortunately, Buehler’s most recent challenge is his toughest, as he faces the uncertainty of a brain tumor.

Hill was at the premiere of the film, pushing this inspirational story out to the masses. Without having seen it I can only imagine that this film is both uplifting and heartbreaking. If the film is made with as much passion and heart as Hill gives on the court each night, then it is surely an emotionally moving documentary.

While the Suns may be struggling on the court, it is good to see their stars do things off-court to help spread the kindness of others.