Suns Spot | To Bled or Not to Bled 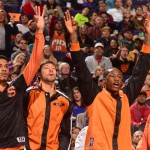 I admit, I have mixed emotions about the injury to Eric Bledsoe. Prior to his surgery to repair a torn meniscus the Suns were the surprise of the NBA, solidly in playoff contention with a 19-11 record.  They are 5-6 since and clinging to a playoff spot.

Every indication is that Bledsoe will take his time rehabbing the knee to make sure he’s 100% healthy before returning to action, so there’s no telling when we’ll see him again this season. Part of me feels he should take as much time as he needs, and maybe even more.

There are six elite teams in the Western Conference. The ageless Spurs continue to be the class of the league. The Thunder, Rockets, Clippers, Blazers, and Warriors are all loaded with young talent and are only going to get better.

All these teams are on pace to win at least 50 games this season, and are built for long-term success. Even a completely healthy Suns team would be hard pressed to crack that group this season. To once again reach the top level of the Western Conference, the Suns, as much as I love this year’s model, need to a few more key pieces. Adding another quality young player with a high draft pick would help.

On the other hand…

I can’t wait until Bledsoe gets back on the court. It would be great to see what kind of run this team could make with everyone healthy. The total domination of the Pacers on Wednesday night, who happen to have the best record in the league, proves that this team can play with anyone, with or without Bledsoe.

Everyone in the rotation is playing at or near career best levels. Miles Plumlee is averaging nearly a double-double and is in the top 10 in blocks. Channing Frye is having a truly miraculous comeback season. Gerald Green is finally in a situation that is allowing his incredible talents to emerge (did you see that dunk?). PJ Tucker has settled in as a starter and team leader. The Morris twins are providing a great spark off the bench. Leandro Barbosa is back, and hasn’t missed a beat. Jeff Hornacek is a strong candidate for NBA Coach of the Year.

With Bledsoe back, he and Goran Dragic can pick up where they left off, quickly becoming one of the top backcourts in the NBA.  Did I mention that I love this team?

OK, maybe my emotions aren’t as mixed as I thought.

Where: US Airways Center

In this story: Phoenix Suns, Suns Spot, US Airways Center