Suns Spot | The Audacity of Hope 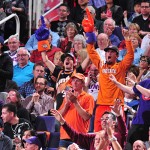 DPJ is excited to present the return of our Suns Spot blog series, with a fan’s perspective of Phoenix’s first major league sports franchise.

The Phoenix Suns will not be good this year. They will not make the playoffs.  In fact, many “experts” are predicting they’ll be the worst team in the Western Conference, if not the league.

So why am I more excited about the future of the Suns than I have been in the last several years? To answer that we need to take a look at how we got here.

How Run and Gun Became Chuck and Duck

Suns fans have been blessed over the years with exciting, offense-oriented teams that were a lot of fun to watch. This was never more evident than during the Nash, Stoudemire, D’Antoni years of the last decade. While they never quite made it over the hump, they were always competing for a title while playing a brand of basketball that kept even the average fan engaged.

This was also the beginning of their slide. With cost-cutting measures by new ownership, questionable personnel moves, front office and coaching shakeups, and a series of draft picks either traded away or that didn’t contribute, they became more and more reliant on the extraordinary skills of Nash just to stay competitive. They were still winning, but we fans were getting more and more frustrated as we witnessed the talent around Nash erode. As a community we almost were happy for Steve when he was essentially able to hand-pick his next destination with the hated Lakers (ok, I said ALMOST). This all culminated last year with a season that can only be described as a debacle. The front office tried to convince the fan base that they were a playoff team. At the same time they were saying they were in a rebuilding mode. The roster was poorly constructed with too many players at the same positions; a bunch of complementary players and no “go to” guys; an odd mix of young and veteran players; and a lack of athleticism for the style of play the coaches were touting. The mid-season coaching change turned out to be a disaster.

The worst part was they had few assets, either in players or draft picks, to parlay into a top line player or two. This is a star’s league and they had none. Thankfully for all of us, this resulted in the end of the “Lance Blanks era.”

Okay, enough about the past.  Let’s look at the positive developments that are cause for long-term optimism. The hiring of Ryan McDonough as new General Manager has brought immediate results. He’s made more moves in a few short months than the former regime made in years. His decisive action has given the fan base a renewed confidence that there is now, finally a REAL plan in place.

He has completely reshaped the roster, adding youth, athleticism, depth, and competition at several positions. He traded for a potential star in Eric Bledsoe. He also traded for two young players who will contribute immediately in Miles Plumlee and Gerald Green. He drafted a 20 year old center and an 18 year old guard in Alex Len and Archie Goodwin respectively, who both fit in perfectly with the team’s long-term plans and who have the upside to be solid NBA players for the next decade or more while allowing for time to develop. Probably the most important impact of all these moves is that they have potentially four 1st round picks in next year’s draft, which many expect to be the strongest and deepest in years. They have a roster full of young athletic players with tremendous upside and several future draft picks. The cupboard is no longer bare.

The other reason for optimism is the hiring of Jeff Hornacek as head coach. Hornacek is intelligent, articulate, well-organized, gets along well with others and is a genuinely good guy. While these are great qualities for any profession, they don’t necessarily translate to head coach of an NBA team.

What will set him apart, however, are his other qualities. Drafted in the 2nd round by the Suns after a solid college career, there was no guarantee he was ever going to play in the league. He worked extremely hard just to make the roster as a rookie. He continued to improve and when he got his opportunity he seized it.

He became an integral part of a Suns renaissance in the late 80’s-early 90’s that saw them average 55 wins over a four year stretch and earn a trip to the Western Conference finals. He never backed down from a fight, and his toughness as a player is one of his most underrated attributes (he became one of Jerry Sloan’s all-time favorites while starting on two Utah Jazz finals teams).

Always a fan favorite even after he left the Suns, it was a stroke of genius to bring him back into an organization that sorely needed to reconnect with its past after last year. He will hold each and every one of his players accountable.  With a young team with low expectations he will have the luxury of only playing those who give him maximum effort. The young roster will also be well suited to his ability to teach and communicate exactly how he wants his team to play.

Our Secret is Patience

So, for those of you who are willing to be patient, which is never easy in a “what have you done for me lately” society, it is going to be an exciting ride. Short-term, it may be a little difficult to watch at times.

For me though, I can’t wait to watch this team, and organization, rise from the ashes once again.

Where: US Airways Center