From the Mag | Creating Downtown 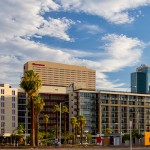 Before you hit the sidewalks for the 25th anniversary Art Detour this weekend, we’re revisiting artist, writer, and advocate, Susan Copeland’s overview of the impact the arts have had in our downtown – originally published in the Nov/Dec 2011 edition of Downtown Phoenix Journal Magazine. Her article provides extra background for appreciating Artlink’s “Detour in Time” exhibit at the A.E. England gallery, open this weekend for First Friday, and Saturday and Sunday for Art Detour.

Creative spaces in the shadow of the Downtown Phoenix skyline. Photo by Jack London.

What is it about Downtown Phoenix that interests a college student, a developer, a cyclist, a chef, an artist or an engineer?

It’s the energy on the streets and the buzz in the cafes. It exists in every coffee-house conversation, every stroll down a newly shaded street, at any art opening, and in the first bite of sushi. It’s the young couple with the stroller, baby and fuzzy dog walking after dark. It’s the lunchtime food truck queues, the thunder of balls in the bowling alley, and the smell of fresh peaches at the market. Engaged people are creating new life in downtown Phoenix and the evidence can be seen, heard, felt and tasted.

This buzz is firmly rooted in the creative community that has worked for many years to bring downtown to life. It is evident in the history of the arts-led transformation of downtown, and how it has fueled revitalization and overcome the obstacles that challenge the continuation of this transformation.

The roots of this transformation can be traced through the history of Beatrice Moore and Tony Zahn, who came to Phoenix sight-unseen in 1986. They were drawn by the optimism behind the city’s name, the desert and the non-hip art scene. They created the very first Art Detour, an annual tour of artists’ studios with a small group of 20 art spaces. “It was a way for artists to show their own work independent from galleries. It was an educational event for the public,” Moore said.

“[Art Detour] was a way for artists to show their own work independent from galleries.”
— Beatrice Moore, GAMA

Moore and Zahn watched gentrification take place, often spurred by the unwitting ability of artists to make a place cool. Their first artist studio was in an old brick warehouse on the site where U.S. Airways Arena now stands. A new jail occupies the site of their second studio. Recognizing that a renter’s fate is determined by his landlord, they bought their first building.

“Artists need to get ownership,” Moore said. “Young artists are not planning for their future. New construction is often not affordable for studio space.”

Their purchase and renovation of historic buildings along Grand Avenue not only created affordable artist studios, but also helped to transform a formerly decrepit downtown stretch of boarded-up buildings into a revitalized corridor that draws thousands of people to art openings, studios, a growing number of bars and restaurants and the annual Grand Avenue Festival.

“It is a diverse and younger crowd, and has introduced a lot of new folks to the museum.”
— Jim Ballinger, Phoenix Art Museum

A Detour Takes Hold of Fridays
The success of the yearly Art Detour led another group of artists to start a monthly tour called Phoenix Arts After Hours. This gave birth to the nationally lauded First Friday, a self-guided tour of art spaces and galleries held on the first Friday of every month. It has become the core of the downtown arts scene.

The Phoenix Art Museum has participated in Artlink’s First Friday art walk on and off since its inception. “We’ve had a very positive connection with First Friday,” said museum director Jim Ballinger. “We’ve had anywhere from 800 to 2,000 people come through the museum on a First Friday evening. It is a diverse and younger crowd, and has introduced a lot of new folks to the museum.”

Would there be as many new restaurants, condos, galleries and hotels downtown without the presence of 10,000-plus people wandering around downtown on First Friday? The presence of the creative community has brought life, vitality and identity to downtown.

“The easiest way to find a community in Phoenix is to participate, get involved.”
— Cindy Dach, Roosevelt Row CDC

The Row Takes Shape
When Cindy Dach and Greg Esser moved here from Denver, they struggled to find a community. Eager to renovate and without any appealing living spaces available, they began an odyssey. Fifteen years, several buildings and many projects later they helped make Roosevelt Street a cornerstone of the downtown arts community. “The easiest way to find a community in Phoenix is to participate, get involved,” says Dach. That they have. They formed the successful eyelounge and 515 artists’ collectives, MADE Art Boutique, Kitchen Street Studio and the Roosevelt Row Community Development Corporation (CDC).

Wayne Rainey, Kimber Lanning and Dach/Esser all bought buildings and created art spaces within six months of each other. The prices were low enough at the time to make the spaces affordable. Dach says that artists are natural problem solvers. “We looked at the closed up buildings and dark spaces and said, ‘Yeah, this sucks. How can we fix it?’”

It is this type of creativity, community involvement, forward thinking and innovation that many people believe will move Phoenix forward. Ed Lebow, Public Art Director for the City of Phoenix Office of Arts and Culture, says, “It’s the small things that form the connective tissue that makes the big things work.”

Community Sustenance
Chicago transplant Cindy Gentry fell in love with the historic Santa Fe Depot in the warehouse district near Jackson Street. Her goals were to create easy access to healthy food for low-income residents, help keep farmers on their land and create jobs. “Our focus was on low income people but we didn’t want to do it in a vacuum,” Gentry said. “We wanted to create a place where people from all backgrounds could come together.”

She was drawn to downtown because “the creative energy of the city lies here. A connection to the arts community was a logical choice.” Although the Santa Fe Depot market never happened, Gentry [as executive director of Community Food Connections] did create the Phoenix Public Market, a grocery store and a thriving farmers market, with a strong emphasis on organic produce and handmade crafts, that anchors Saturday mornings downtown. Says Gentry, “The creative energy that is here in Phoenix is looking for places to get out.”

“The creative energy that is here in Phoenix is looking for places to get out.”
— Cindy Gentry, Community Food Connections

That creative energy is apparent in the art-centric downtown development of developer and indie rocker Tim Sprague, of Habitat Metro. Two of his current projects are the adaptive reuse of an old hotel, the Oasis, to create affordable living and work spaces for artists, and, most recently, a remodeling of the Lexington hotel that centers around arts and culture.

“Humans have talent that we should recognize and celebrate,” Sprague said. “Performing arts, music, media, theatre – they are the spice of life. Art has the ability to bring people together to initiate discussion. It’s an automatic switch for turning on tolerance and bringing together diverse ideas.”

“The organic arts scene that developed brought focus to the downtown,” he said. “It provided the cushion and continuity for things to keep happening. It brought traffic and people downtown that would not have come. It made downtown relevant.”

This ability of the artistic community to create relevance and continuity was evident to George Kritikos and his wife Stacy, who left Chicago to buy and take over the Athenian Grill, a Greek restaurant on Central just south of Roosevelt. Kritikos believes that the arts community is good for the area. Historically, he watched how the arts helped in the transformation of downtown Chicago from a scary dark place. “(Mayor Richard) Daly cleaned up the streets. There was artwork, painted cows, landscaping, lighting. All of it together helped take away the scary aspect of the streets. Then coffee shops and restaurants starting popping up.”

“The organic arts scene that developed brought focus to the downtown. It provided the cushion and continuity for things to keep happening. It brought traffic and people downtown that would not have come. It made downtown relevant.”
— Tim Sprague, Habitat Metro

Filling the Gaps
The biggest stumbling block to this transformation in Phoenix may be the empty lots that divide all of the cool, hip things from each other. When you look down First and Third streets at night, south of Roosevelt, it is dark and scary. People are afraid to walk north from the Sheraton and Alta Lofts.

But the creative community is working on a solution for that too.

Many temporary uses for empty lots have been proposed, but shot down for fear of them becoming too popular and permanent – leading to a potential for public outcry when the temporary project has to make way for a permanent structure. Nevertheless, two artistic uses have recently been implemented.

On Roosevelt near Fourth Street, the Roosevelt Row CDC, has cleaned up, dust-proofed and put temporary lighting in an empty lot to create the First and Third Friday A.R.T.S. (Adaptive Reuse Temporary Spaces) Markets, giving small local vendors the opportunity to become part of the popular art walks. Small booths dot the lot twice each month selling everything from ice cream to hand-crafted wood items.

A few blocks southeast of the A.R.T.S. Market is Valley of the Sunflowers, another Roosevelt Row temporary adaptive reuse project, which broke ground in September, and will feature an entire block of sunflowers. It is the brainchild of Kenny Barrett, downtown resident and newly appointed project director for Roosevelt Row’s A.R.T.S. program. With grant funding from Intel and volunteer support from the community, the project will produce sunflower oil that the students at the adjacent BioScience High School will help harvest. They will then use the oil to run the biofuel car that they are creating.

As little as it is, the Valley of Sunflowers project may just be one of the most important projects in downtown Phoenix in the past 10 years. It has brought together young people, artists, engineers, developers and the city to create a project that is sustainable, creative and breaks the boundaries of what it is possible to accomplish in downtown Phoenix. Most importantly, it removes the barrier of fear and apathy toward addressing the problem of the empty lots.

It is easy to see why a college student, a developer, a cyclist, a chef, an artist and an engineer would be drawn to a place like Phoenix. The vibrancy and buzz that created places like Paris, Chicago and Portland are in their infancy here. Phoenix will not recreate or become any of those places. It is creating its own identity. It is growing organically because people want this sustainable lifestyle. More and more people are choosing an authentic experience: enjoying coffee and a crepe at JoBot; shopping for handmade one-of-a-kind items at MADE; finding organic locally grown produce at the Public Market; mingling with neighbors at Faces, Places and Spaces amidst the art at Bragg’s Pie Factory; or lingering over a late night imported beer at Carly’s. If none of these places and events are familiar, then you are missing out on the core of the new Phoenix.