What a Grand Place It Is 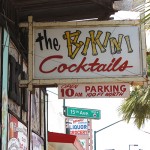 There are some advantages to your bike being your only source of transportation around Phoenix. One of them is no longer being subjected to the inevitable conversation on the bus or train where someone says that Phoenix isn’t a real city and has no character. The infamous Bikini Lounge at Grand and 15th Ave

I get it. You came from somewhere else and it was so awesome you had to leave. Then you came to Phoenix expecting it to answer all of your problems and it turns out it’s just as messed up as everywhere else and, on top of that, it has spiky plants, absurdly hot weather and none of the flowers you could grow back in Michigan will grow here.

When I try to pinpoint what Phoenix’s character is, I often end up thinking about how our isolation and the possibility that the heat will kill you define our actions here. I also try to see this place like someone who hasn’t lived here for over 15 years and accepts it with open eyes.

I look at Grand Avenue.

Due to a little-known zoning restriction, the sweat of a lot of people, a slower process of development and a unique positioning in the geography of Phoenix, Lower Grand Avenue has managed to retain enough remnants of the early developments of this city to give us the sense that Phoenix does not have to mean generic strip malls and chain restaurants. It is one of the few places where we can look at what is still there and imagine the generations that were there before us. Phoenix is in fact not a blank slate to wipe clean and re-imagine how to rebuild for whichever developer’s benefit. It has a history—one that goes back much farther than even these poured concrete and masonry buildings. Beatrice Moore has pretty much seen it all, partly because earlier developments for the now US Airways Center and Chase Field forced her and her partner to be moved to whichever location was just on the fringe of the developer’s zone. They looked to Grand Avenue with its unique, older buildings, lower prices and distance from possible development to be able to work and be creative in peace.

It seems that Grand has managed to remain this type of place. It integrates families, artists, new and old businesses, and social welfare programs. It seems quieter and slower there. There’s more time for cactus to grow and for people to think, thoughtfully, about what might be best for the community. Unlike other areas of the city that have seen immediate high rise development, speculation and the battle of large chains moving in to take advantage of high trafficked areas (monstrosity at 7th Ave and McDowell, I’m looking at you), Grand Avenue has been churning on, planning for ways to make it a lively area without simply focusing on it as a one-hit destination. This is an area where people can afford to live and breathe. Stephanie Carrico, co-owner of the Trunk Space, sees Phoenix as a small town in a big city and maybe this is its unique key to potential success. In a community where people are aware of who has lived there for generations and what businesses helped build the area, it seems more likely that people will look out for each other’s interests. They’re less likely to allow developments that turn the location into a concept of the location without any remaining soul.

Grand Avenue, partly because of the care people have put into adapting and reusing buildings there, is a place that makes people stop and think. Not as many people want to contend with it as they might with more hip locations because, in order to do so, you are confronted by a place that is rooted in time and actually manages to say that this is Phoenix. Now are you going to tear it down and pretend it’s somewhere else, or are you going to figure out how to work with it?