A Conversation with Cindy Dach 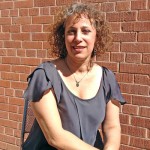 “We should always assume that things can be better.”

Cindy Dach wears half a dozen hats at least and has been a key player in the revitalization of the Roosevelt Row area. She is a board member of Downtown Phoenix, Inc.; co-owner and general manager of Changing Hands Bookstore, which is about to open a Phoenix location in Uptown (Camelback Road and 3rd Avenue); owner of Made Art Boutique on Roosevelt and 5th Ave.; co-founder of Eye Lounge, a contemporary artists run collective on Roosevelt Street; co-founder of Arizona Chain Reaction (now Local First Arizona); co-founder and board member of the Roosevelt Row CDC; and one of the driving forces behind the annual Pie Social, the RoRo Chili Festival, and the Feast on the Street, just to name a few. She and her partner, Greg Esser, moved to Phoenix from Denver in the mid-nineties and immediately set about seeking community. Even finding brunch back in those days was a challenge. “We always ended up at IHop, because there weren’t any other choices,” said Dach. They began taking steps to build the community they craved by creating Eye Lounge, which was originally an artist collective exhibiting at various locations.

After a while, they discovered inexpensive property in a blighted area along Roosevelt Street, and in 2001 they bought a building, rolled up their sleeves and create a permanent gallery for Eye Lounge.  In reflecting on that time, Dach said, “Wayne Rainey and Kimber Lanning had begun doing things on Roosevelt then as well. We didn’t originally know each other, but we were all focused on creating a place for the arts and artists, and so we found each other.”

The impact of creating a community for artists and the arts on Roosevelt has been exponential. First Fridays went from a few hundred urban pioneers willing to seek out galleries on Jackson Street, Roosevelt Street and Grand Avenue, and exploded during those early years. Thousands of people now flock to Roosevelt and the area supports several galleries, retail stores, coffee houses, and restaurants.

“We didn’t originally know each another, but we were all focused on creating a place for the arts and artists, and so we found each other.“

Along the way, Dach and her cohorts established the Roosevelt Row Community Development Corporation, a non-profit 501(c)3 organization to further the unique cultural character and creative assets of the Roosevelt Row Arts District. Fellow Roosevelt Row and Evans Churchill District neighbors worked together to create innovative grassroots community building events, such as the annual Pie Social, and the Chili Festival.

In addition to infusing the area with the arts, Dach and others recognized the negative impact of the empty lots and created A.R.T.S. (Activated Reuse of Temporary Spaces) initiatives to focus on activating these dead spaces.  To date these programs have included the creation of a temporary A.R.T.S. Market on First Fridays, the development of the innovative Valley of the Sunflowers project, and support of The Lot: What Should Go Here? Pop Up Park at 2nd Street and Roosevelt.

Dach believes that the development of the ASU Downtown campus and the coming of light rail have been key to the rebirth of the area. “It started with the nursing school. Suddenly you noticed lots of young women with ponytails out and about,” says Dach, laughing. “But as more and more of the schools moved downtown they brought a whole range of young people into the neighborhood,” she continues. “And they are looking for things to do and places to hang out.”

Dach believes that Downtown Phoenix, Inc. can make Phoenix more competitive. “The ratings system for development is good and DPI can help us grow the city in a smarter way.” Her advice for the organization? “DPI needs to allow for diversity in the widest possible sense to participate in change-making.” As she puts it, “We should always assume that things can be better.”

Cindy Dach, along with fellow DPI board members, Kimber Lanning, and Tim Eigo represent a powerful, grassroots movement that has brought a whole new kind of energy and promise to downtown. Their place at the table speaks to the impact they’ve had in creating the community they were seeking all those years ago.

In addition to her commitment to Roosevelt Row, Cindy is a staunch supporter of bringing a great bookstore to central Phoenix. It took eight years for Tempe-based Changing Hands to find the right location and circumstances to open a Phoenix store.  Dach is confident that Phoenix can support the venture. “Phoenix is ready for a bookstore, but I think we have some bad habits to break.”  She explains, “It’s very obvious and for good reason the Phoenix community has been buying their books online. I hope they don’t experience sticker shock and that they realize that it’s not just the book they are buying at full retail value, they’re buying the experience, they’re buying the store, they’re buying the bookseller who’s going to recommend the book.”

“But as more and more of the schools moved downtown they brought a whole range of young people into the neighborhood. And they are looking for things to do and places to hang out.”

Ultimately, Dach believes that Phoenix is not only ready, but deserves a great bookstore. “Phoenix deserves another great community gathering place; we have some great gathering places, but we’re ready for another model and I think the bookstore could be it.”

When did Dach realize that Phoenix was her place? She says it wasn’t one moment, but a series of little moments. “I remember working on Eye Lounge and going to Portland’s covered in dust and having conversations with people about what downtown needs. I began to feel like maybe I do have a place here. It really was like ‘if you build it they will come.’ I began to feel that I did have a purpose, to be involved, and that it’s fun to be involved.”

Dach believes that one of the most amazing things about Phoenix is the people.  You say ‘hey, I have shovels and we need to clear this lot’ and, lo and behold, they show up. Phoenix just wants to know how to help.”

When asked about the possibility of an Enhanceed Municipal Services District for the Roosevelt area, Dach said, “In my head it can be great to see a community being able to take care of itself, because these services just don’t exist now. You can whine and complain and ask for them, but they’re not coming and at the end of the day it’s going to come down to the community having dialogue. What I love about the process we’re about to enter, it’s going to be the best way to engage everyone.”