Listen Up PHX | Grouplove at the Crescent Ballroom 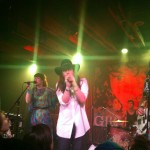 Hannah Hooper of Grouplove and the crowd during the encore.

Monday night at the Crescent, Givers and Grouplove came to Downtown Phoenix fresh off of the second weekend of Coachella 2012. However, the energy on stage and in the crowd betrayed the fact that Coachella had ended at all — Hannah Hooper even said to a beaming-with-pride PHX crowd, “So we just got done with this crazy thing called Coachella…but seriously guys, it’s places and shows like this that we love.”

Atmosphere: Like a music festival’s after-party. Hot, sweaty, and I hadn’t yet seen the venue as packed and energetic as it was last night. There were undeniably a small group of die hard fans that had been to Coachella (probably both weekends) and seen both Givers and Grouplove there. The crowd was also much younger than the Crescent’s norm — the show was 16+, and I’d say the age range capped off at about 25. Except for the 40-something guy dancing his long, curly hair off in front of me. The young crowd fed off the energy from the bands, with most kids dancing or at least singing along the whole show. Givers were the most animated band I’d seen on the Crescent’s stage so far — until Grouplove came on. Givers bassist Josh LeBlanc giving the crowd a chance to participate in the percussion.

Opening Song: Although they took the stage not to their own song, but to the intro of Kanye West and company’s track “Monster,” Grouplove started their set off with “Lovely Cup.”

Closing Song: After re-taking the stage for the encore, they played the radio-friendly “Tongue Tied,” which lead singer Christian Zucconi transitioned seamlessly into a short rendition of Whitney Houston’s “I Wanna Dance With Somebody” and finally finishing with “Colours.”

What the band wore: Givers wore an assortment of plaid button downs, v-necks, and screen-printed T-shirts. Grouplove were more classic hippy than hipster with their fashion, with Zucconi in a flow-y floral button down, and Hooper in a breathy green patterned dress and kick-ass studded black short boots. Rabin took the prize for most unique, however, in a tank top, black leggings, and tall, patterned socks with — I think — bears on them. (It looked like the bear from California’s state flag, but it was too hard for me to tell.)

What the crowd wore: Lots of tank tops all around, on both the guys and girls. I spotted quite a few Coachella wristbands still on the wrists of the crowd as they waved their hands and danced.

Band’s Drink of Choice for the Evening: Nothing. I can’t even remember seeing them take a sip of water the whole set.

Blogger’s Drink of Choice for the Evening: Stella Artois. 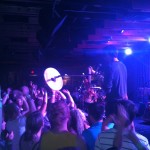 Givers bassist Josh LeBlanc giving the crowd a chance to participate in the percussion. 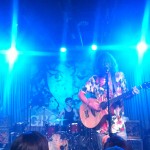 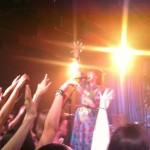 Hannah Hooper of Grouplove and the crowd during the encore. 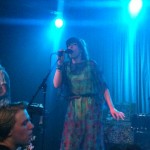 Hannah Hooper in her green dress 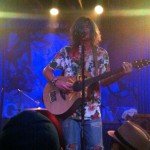