Listen Up PHX | White Rabbits at the Crescent Ballroom 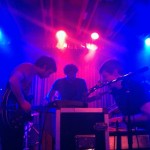 For Listen Up PHX’s concert recaps, I’m trying something new: I’ll be taking notice of specific things at each show I go to, and recap them in a bullet-friendly list. So, here goes my first structured recap for the White Rabbits show last Friday night at – where else? – the Crescent Ballroom.

Atmosphere: While waiting for White Rabbits to take the stage, the mood was tense and impatient – more so than normal for anxious concert-goers. It felt like there was a collective attitude of, “I’m bored, let’s get this show on the road!”

Once the show was on the road, though, it was a very chill crowd. Not much dancing (even during the most upbeat tracks), not a lot of singing-along, just a collective and contented bopping of heads and swaying of bodies. It was almost like everyone who had come out that night was just there to see some live music on a Friday, and not necessarily familiar with the band. However, everyone seemed to really enjoy the show, and I’d venture to say they got a few new album downloads that night. Opening Act: Not Gull, as advertised, but Zombie Jesus. I have to say, although his sound was decidedly not my style, he was a talented multi-tasker, playing guitar and drums at the same time. He got a pretty solid cheer from about a fourth of the crowd by the end.

Opening Song: Heavy Metal from their new album Milk Famous. Watch their newly-released video for the track on YouTube.

Closing Song: Kid On My Shoulders from the 2007 album Fort Nightly.

What the Crowd Wore: As usual at the Crescent, the crowd was mostly 20-somethings to 30-somethings, with styles ranging from the typical button-down wearing hipster to (surprisingly) the typical Ed Hardy-t-shirt wearing dude.

What the Band Wore: Blue jeans and lots of fitted, v-neck t’s. Guitarist/vocalist Alexander Even broke the trend with a grey tank.

Band’s Drink of Choice for the Evening: Tecate.

Blogger’s Drink of Choice for the Evening: PBR.