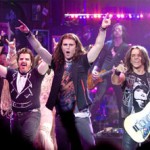 Each week, Listen Up PHX brings you The Lineup, a list of live music events going on in greater Downtown Phoenix, picked by music blogger Erin Bartynski.

This week we have two notable shows at the Crescent, more from the Arizona Center’s Live Music Series and the Civic Space Park Concert Series, and a slight change of pace for this blog – a musical!

Thursday: Neon Indian at the Crescent Ballroom. Doors at 8 p.m., music starts at 9 with opening act Friends. The show is, sadly, already sold out, but it’s worth including on this list both to get those already going excited for it, and to encourage those resourceful concert-goers without tickets to find some. Bug a friend who’s +1 isn’t claimed, post an ad in your apartment’s mail room, and get on Craigslist!

If you can’t come across Neon Indian tickets, don’t despair – your evening of live music is not lost. Head over to the Arizona Center’s Live Music Series, where you can see the Southwest Surfers for free from 5-7 p.m.

Friday: Rock of Ages, the traveling musical which just finished its run at the Mesa Arts Center, will be at the Orpheum Theater downtown at 8 p.m. The show includes songs from Twisted Sister, Poison, Whitesnake, Journey, Foreigner, and more. Check out tickets to the head-bang-worthy comedy here. Sunday: Sucré, featuring Stacy King of Eisley and Darren King of Mutemath, will be at the Hard Rock Cafe at 8:30 p.m. $10 in advance, all-ages show (must be over 21 to be in the bar area). Listen to their newly-released first album on Spotify.