Suns Spot | Bring on the Blazers

Before the season started, most “experts” said the Phoenix Suns would be lucky to sneak into the playoffs by grabbing one of the last spots. In fact, Chad Ford of ESPN.com said the Los Angeles Clippers would finish with a better record and make the playoffs over the Suns. Back on October 22, when I gave my season preview, I said the Suns could finish as high as the three seed out West. Turns out I was right. (Be sure to disregard my picks for the other teams, though.) My point isn’t to brag about how I was right, but rather to point out how goals change. 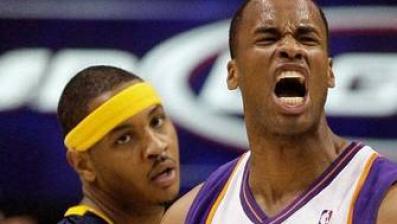 The Suns have been on a tear of late. Photo courtesy of FOXNews.

The Suns probably would have said the same thing before they played a game. Early in the season, however, it was apparent the Suns would make the playoffs. Come February, it looked as if the Suns had a chance to get the fourth seed, so the goal changed. The last two weeks of the season saw the Suns with a legitimate shot at picking up the two spot, so the goal changed once more. Suns ended up with the three seed and the goal has changed yet again.

Rather than just be satisfied about making the playoffs, the Suns are now looking to make some noise, and rightfully so. With the way the Suns are playing now, there is no reason to think they do not have a realistic shot at making the Western Conference Finals or even, dare I say, the NBA Finals. The West is wide open. The Lakers are no longer the clear-cut favorite to represent the West in the Finals. Every team has injury problems. Every team has a chance to advance deep. So, why not the Suns? With that, I say, bring on the Portland Trailblazers and the rest of the Western Conference.

When the Blazers roll into town this week, there is a good chance they’ll be without their superstar guard, Brandon Roy. I fully expect the Suns to come out prepared. With Roy possibly out of the lineup, I believe Phoenix will jump on Portland early and often. We need to do our part as well, though.

The atmosphere at US Airways Center has already changed. The last three regular season games against the Spurs, Rockets and Nuggets had a different vibe to them. This is the time of the year that gets fans pumped. Pumped like only a Danny Granger/Channing Frye altercation can get fans pumped midway through the regular season. Fans have been intense the last few home games. Let’s keep it that way. Let’s bring out the foam fingers, the orange and purple wigs and the face paint and hold nothing back.

The Coyotes have the “white-out” for the playoff run, so why can’t we have an “ORNG out?” Our team has home court advantage for at least the first round of the NBA playoffs. We’re the sixth man. We can be the difference. Come Sunday and Tuesday, I expect to see USAC turned into a sea of orange. Are you with me, Planet Orange?