This is Your Call to Action, Suns Fans

Calling all Suns fans, calling all Suns fans, I have an announcement to make. With 15 days until the home opener of the 2009-2010 Phoenix Suns season, we haven’t much time. Time for what, you may ask. Time for change. I’m not asking for a change in personnel. I’m not one of those guys that’s going to sit here and say, “Fire Kerr,” or “Trade STAT.” The change I’m talking about must come from the fans.

As a season ticket holder, I’ve noticed the crowd at US Airways Center doesn’t always seem to bring it. Now, granted, there are the few occasions when teams such as the Lakers or Spurs are in town and the people in attendance really get up for the game. What we need is that same intensity every time out. As fans, we complain when players only show up half the time. We demand better of them, but shouldn’t we also demand better of ourselves?

I attended a few Mercury playoff games this year, and I think Suns fans could take note of the Mercury faithful. While the number of people in attendance was much lower than what you see at a Suns game, the fans there were far more involved. Everyone was constantly up and out of their seats, cheering. I saw people standing the whole game. That’s what I want to see at Suns games. Everyone on their feet. And, I don’t want to hear that excuse that if you stand, the people behind you can’t see. If they want to see, they can stand, too. They’re not watching a movie, they’re at a sporting event. Simply standing won’t cut it though. We need something unique that’s all our own. A few years back, Kings fans in Sacramento were known for having cowbells; why can’t we come up with something like that? I know there are fans out there with ideas — let’s hear them! Let’s come up with a signature chant that becomes second nature. 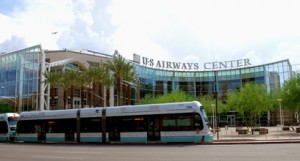 You can take the light rail for free to all Suns games this year.

It’s not just the fans that attend games that need to step it up, though. It’s the entire Downtown Phoenix community. Local businesses Downtown should be decked out in purple and orange. Whenever there’s a Suns game, it should be shown in every bar and restaurant in the area. Have drink specials. Some businesses are already ahead of the game. Bar Smith projects all Suns games on its rooftop. Majerle’s regularly gives out 15% off discount cards to patrons that stop by on game day. Tom’s Tavern offers free parking at Patriots’ Garage to anyone that dines there before heading to a game. Now let’s get some of the other bars to do the same. Coach & Willie’s, Cooper’stown and Stoudemire’s are just a few of the bars within walking distance of USAC. All of them should be running gameday specials. And, if they already are, I want to hear about them. Get them out to the people. Every time the Suns take the court, Downtown should be one big party, just as it is outside the arena before a game, with many local radio stations having games and giveaways. METRO is doing its part by giving free light rail rides to anyone with a Suns ticket. It’s up to us to do the rest.

So, this is your call to action, Suns fans. Let’s turn US Airways Center into a sea of orange. Let’s make it a place opposing teams fear visiting. The product on the court is going to be very entertaining. We just need to do our part. Give that little extra push. We can be the difference. And, when we are, good things will happen, on and off the court.