For the second time this year, a Suns two-game skid has caused me to switch topics for the Suns Spot. Instead of writing about the current stretch of home games the Suns are finally on, their recent performance has forced me to switch gears. During Wednesday night’s loss to the Oklahoma City Thunder, the Suns lacked punch off the bench, with the reserves only chipping in 12 points. This is normally where Leandro Barbosa would come into play.

With his scoring numbers dipping just a bit from recent years and the emergence of Jared Dudley and Goran Dragic, it was easy to overlook the play and overall importance the Blur has on the team. However, even with the slight drop-off in overall scoring, LB was shooting a career high from the field before his nasty ankle injury (although even when playing he was banged up) and he was on par for his overall career average from long range, plus he was still getting to the basket at will. The only reason there has been a decrease in his scoring is due to the fact that he was playing less minutes this year and taking less shots. The stats don’t even begin to tell the story of what Barbosa actually brings to the table.

When LB is healthy he gives the Suns a whole other element. With him on the bench, the second string has a lot more firepower to work with. Although he hasn’t done as much this year, partly due to the injury issues and partly due to the other bench players stepping it up a notch, he still does provide another threat that can always come in handy. This missing threat has become very evident over the course of December as Barbosa has been sidelined with the ankle sprain.

Before Barbosa went out, the Suns were 8-2; since then they’ve struggled to a 10-9 mark, and the team definitely could’ve used LB in a few of those losses. The most recent loss to the Thunder was a prime example. The Suns got brilliant performances from three of their five starters, but got very little help from their reserves. In such a close game, bench play can make all the difference. That’s why come Christmas evening, barring any setback today or Christmas morning, all Suns fans can thank whatever higher being they believe in that Barbosa will be suiting back up in the purple and orange. 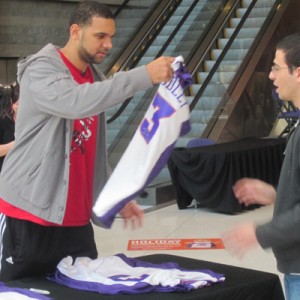 Jared Dudley was in the holiday spirit this week, giving away 50 signed jerseys to fans.

Earlier this week Jared Dudley and the Phoenix Suns began the “Jared Dudley Twitter Holiday Jersey Giveaway” as Dudley and the Suns teamed up to give away 100 of the former Boston College standout’s jerseys. Suns fans were able to win one of the first 12 autographed Dudley jerseys by entering contests through the Suns’ official Twitter page. In addition to those 12, the gritty small forward gave away 50 jerseys himself to the first 50 fans that showed up outside the Casino Arizona Pavilion at US Airways Center Tuesday afternoon. The remaining jerseys will be given out during Friday’s home game against the Los Angles Clippers.

Ride the Rail to the game (and Majerle’s)

Speaking of the home game this Friday against the Clippers, Suns fans are encouraged to attend the game via the light rail as part of the Ride the Rail Event, which allows anyone with a ticket to an event at US Airways Center to ride the METRO light rail for free. And, for those that are looking for a place to grab drinks before or after the game, be sure to swing on by Majerle’s, just up the street from the Purple Palace at 24 N. 2nd St., as it will be open on Christmas day to serve those in the area and those attending the game.

On one last note, everyone should head over to the Bright Side of the Sun to check out Mike Lisboa’s brilliant Suns-themed holiday poem, ‘Twas the Night Before Clips-mas. You won’t be disappointed.