Buy a ticket and ride the rail courtesy of a new partnership between METRO, US Airways Center and the Phoenix Suns called Rail Ride Event. Starting October 1, tickets displaying the Rail Ride Event logo will be good for the event and rides on the light rail.

When a ticket is purchased for a US Airways Center event, the METRO fare is complimentary four hours before the event and for the rest of the day after. The partnership hopes this will be a “convenient, safe and great way [for people] to come Downtown.”

A first-of-its-kind partnership between an entertainment venue and a transit agency, the Rail Ride Event program is unheard of across the country. The idea came along shortly after the NBA All-Star program in Phoenix last February.

According to Suns President and CEO, Rick Welts, people enjoy the idea of “no gas, no traffic, no parking.”

Valley METRO will be paid 31 cents for every person attending the events. Light rail traffic has been 25% above the projection on weekdays and 32% on weekends in its first nine months. As a result of this agreement, METRO will receive an estimated $300,000.

Advertising for the program will begin Sunday with the promotion of single-game Suns ticket sales beginning on Monday. Forty percent of light rail riders use the rail for events and leisure activities.

The first event featuring Ride Rail Event is the AC/DC concert on October 1. 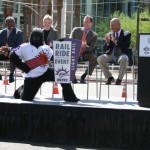 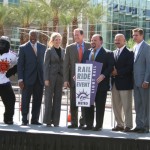 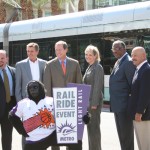 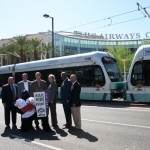 All photos by Alexandra Flamini