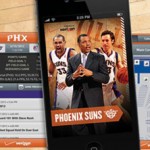 Are you tired of those Angry Birds in Space? Bored with Words With Friends? Confused by the stick figures your relatives make when playing Draw Something? Don’t worry. The Phoenix Suns are here to satisfy your app-etite!

Just in time for the 2012 NBA Draft, the Suns have launched their first-ever mobile app, powered by Verizon. Download the team’s official app for your Android, iPhone or Blackberry before June 28, 2012, and enter to win a personal phone call from the player the Suns select with the 13th overall pick!

In addition to the extensive feature set, Verizon mobile subscribers will receive additional exclusive content via their Android or Blackberry (not available for iPhone users).

Looking ahead to the 2012-13 NBA season, the Suns plan to introduce a tablet version of the app for both Android and iOS platforms, as well as new game elements, contests, special offers and video replays for fans attending Suns home games.

In this story: Downtown Phoenix, from the wire, Phoenix Suns, US Airways Center