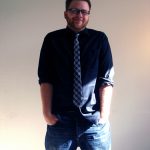 >Mark Dudlik is a man of many ideas.

The fresh-faced, 25-year-old graphic and interactive designer came to Phoenix five years ago, and is now aiming to unearth the hidden Phoenix design community.

Through Twitter, an online social networking site, Dudlik discovered the expansive locality of designers in the Valley, but noticed something else too. Phoenix designers lacked communication between one another. He plans to change that.

With Dudlik’s help, Phoenix may soon hold a design week. Currently slated for October 7-11, Dudlik is working on arrangements to bring the Phoenix design community closer together. Phoenix Design Week will strive to host galleries, exhibitions and lectures along the lightrail route.

“In Phoenix, there aren’t really any design specific events. They are more focused on networking rather than actual design,” Dudlik explained. “Design Week is trying to get all of Phoenix and the Valley together so we know each other more and we can work together to be taken more seriously as a city.”

According to Dudlik, Phoenix is not seen as a regionally independent community. “We’re always looked at as ‘the rest of the Southwest.’ We’re not even mentioned as a city unto itself.” He believes Phoenix can be ranked on the second-tier with Austin and Chicago.

Dudlik said Phoenix Design Week is nothing more than an idea and a lot of people expressing interest at this point. However, the Phoenix Design Week website recently launched online at phxdw.com. It features upcoming valley design events, contact information and a survey for locals express their opinions on potential experiences during the event.

Phoenix Design Week is not the only thing Dudlik is dabbling in. He is working on starting up a networking “hub” for designers and events in Phoenix called PhoenixRev. While Dudlik has not launched PhoenixRev yet, he envisions it as being the host organization to the design week and a way for designers to learn about other design events.

Along with past classmates Tanner Woodford and Adria Robles-Morua, Dudlik runs an online magazine named Fill/Stroke. The idea began as a magazine, but it never made it to print. It is currently operating as an online design blog.

He is now working for Sarkissian Mason, a design company headquartered in New York. The company satellite in Phoenix handles established clients including Mazda and IMAX.com. Dudlik graduated from Arizona State University with a Bachelor of Sciences in Graphic Design. “I’m fresh out of school so I’ve just been helping out wherever I can,” he said.