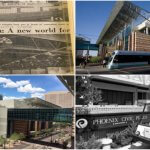 In the early 1960’s, local leaders envisioned a center for cultural and theatrical performances that would grow our convention and tourism business and be a driving force for downtown revitalization. Due to the dedication of early thought leaders, the Phoenix Convention Center & Venues continues to thrive nearly five decades later. Since opening in 1972, the center has expanded three times with the largest expansion project being completed in 2008. The latest expansion nearly tripled the size of the venue, which allows Phoenix to attract more conventions with more delegates and host large/high-profile events that place the City and State in the international spotlight.

When the Phoenix Civic Plaza opened, the average conventioneer was expected to stay in Phoenix for four days and spend approximately $50 per day for an average direct spending impact of $200 per convention visitor. Today it is estimated that the average convention attendee will spend approximately $1,498 during their stay, which includes dining out, shopping, visits to local attractions and excursions to the Grand Canyon and other parts of the State. Since the completion of the $600M expansion project in 2008, the Phoenix Convention Center has welcomed more than 1.7M delegates with a direct spending impact of more than $2.4B.