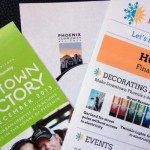 David Krietor has served as President/CEO of the newly-formed Downtown Phoenix, Inc. (“DPI”) since April 8, 2013. In that time, he has begun work with community stakeholders to develop the downtown we want. “Your Downtown” shares his thoughts and DPI’s progress with the downtown community and beyond. Read the other chats here.

Now that affiliate agreements have been signed between DPI and the City of Phoenix, Downtown Phoenix Partnership (DPP), and Phoenix Community Alliance (PCA), work has begun to pull together a consolidated DPI program of work for 2014. I have been meeting with DPI board members and leaders from the City, DPP, and PCA to brainstorm ideas on strengthening core programs and eliminating duplication and overlap. My goal is to present a program of work by the end of November. (Read about recent changes to DPP’s board.) With DPI affiliates in place, the program of work – and the activity it represents – comes next.

Margaret T. Hance Park. Hundreds of residents, including many individuals associated with DPI and its partner organizations, participated in a series of community workshops to help re-envision the 32-acre Margaret T. Hance Park just north of downtown. Design professionals from !melk, Weddle Gilmore, and Floor Associates led the workshops and garnered good ideas and valuable feedback. The team will start to formulate an initial draft design plan to present to the public on November 20. For more information, visit the Hance Park Master Plan Facebook page.

Project Rising Phoenix. Over one hundred downtown advocates attended the launch of Project Rising Phoenix, a non-profit urban infill incubator that will create a pipeline of viable redevelopment projects sourced from and for the benefit of the community. Matthew Meaker, a construction attorney with Sacks Tierney P.A., was named board chair and Leslie Lindo, CSBA, LEED AP was appointed executive director. I have been meeting with Project Rising Phoenix representatives and City of Phoenix staff to discuss priority projects that could benefit from Project Rising’s expertise and affiliations. For more information, visit the Project Rising website.

Adaptive Reuse. It was great to hear the Maricopa County is taking steps to support adaptive reuse of vintage buildings by approving a six-month trial permit for restaurants situated in buildings not specifically designed or constructed for dining. Several DPI board members have been long-time advocates of this economic development tool, most notably Kimber Lanning of Local First Arizona who co-chaired a City of Phoenix task force on adaptive reuse. The task force’s recommendations were adopted by City Council and are now being implemented.

New Times Rankings. One indicator of the positive direction in which downtown Phoenix is heading is the significant number of “best of” rankings in the Phoenix New Times. It is gratifying to see “Best Farmers Market,” “Best New Gallery,” “Best Japanese Restaurant,” and many other “bests” right in our central city. You can view all of the downtown listings on the New Times website, and then jot down the winning shops, restaurants, and attractions to visit this fall.

Getting into the Holiday Spirit. For the second year in a row, JoMarie McDonald with Phoenix Community Alliance is spearheading a community-wide effort to brighten Central Avenue from Camelback Road to Baseline Road with winter holiday lights and decorations. Over 150 individuals and businesses have contributed to the cause. To contribute to the cause, visit the PCA website. In addition, the Downtown Phoenix Partnership’s “Holidays in Downtown” initiative is back for a second year. From the CitySkate Opening and Tree Lighting Spectacular to PJ’s In the Park and Spirits of the Season, these events are community builders and business drivers that are making downtown a destination for holiday activity. Terry Madeksza, Sara Anderson, and the entire DPP staff have worked extremely hard building holiday momentum.

What are some hot button topics emanating from this engaged downtown community?

Phoenix Bike Share. On September 25 of last year at a popular downtown Phoenix event – Pedal Craft – Mayor Greg Stanton announced the City’s intent to implement Bike Share, a healthy and affordable way for residents and visitors to make short trips around town. Making good on its promise, Phoenix is gearing up to launch bike share this winter. In the first phase, Cyclehop, the firm that won the local bid to implement the program, will distribute an estimated 500 bikes at kiosks near prominent downtown gathering spaces, recreation and cultural spots, light rail stops, and ASU campuses. The second phase calls for expanding the program in Phoenix and other cities, creating a regional system. Tempe and Mesa are moving forward to add 250 bikes in each of their communities in the spring of 2014. Corporate sponsorship is key to making Phoenix Bike Share happen, and I encourage anyone and any business reading this to support this important effort.

Improved Evans Churchill On Street Parking. Representatives of Evans Churchill Community Association and Thunderdome Neighborhood Association for Non-Auto Mobility have been working with City of Phoenix staff to finalize an on-street parking strategy for Evans Churchill. Based on a street-by-street analysis, it was recommended that the great majority of meters east of Third Street be removed and that many streets with “no parking” signs be corrected to allow parking. Sincere thanks to Ray Dovalina, Councilman Michael Johnson, Scott Logan, and Kerry Wilcoxon with the City and neighborhood advocates Greg Esser, Cory Kincaid, Jim McPherson, Matthew Taunton, Kevin Rille, Sean Sweat, and Nicole Underwood for working together to advance these much needed improvements.

Streetscapes. Significant streetscape improvements are now occurring in and around downtown on Grand Avenue from Seventh Street to Roosevelt, on First Street from Washington to Moreland, and on Fifth Street between Fillmore and Garfield.

Historic Preservation. Some unfortunate news in our Garfield Neighborhood… one more piece of our architectural history is gone. The owner of the historic W.L. Bobo House demolished the building, as she could not get her asking price for the property.

In closing… I was heartbroken to hear of the passing of Jerome Miller, a long-time colleague during my tenure in the public sector. Jerome was a gift to the City of Phoenix. He genuinely cared about the people he worked with and the people who lived in our city. He exemplified all the best qualities of what we should expect from our public employees.