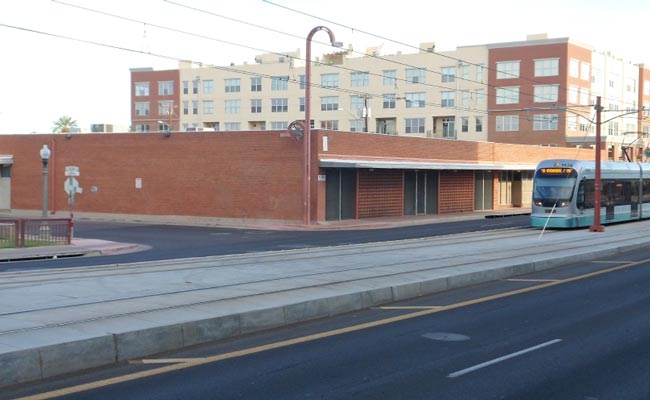 Colliers International in Greater Phoenix completed the sale of a Class C office shell in downtown Phoenix for $2.3 million.

How About Your Office in This 1920s Tudor Revival?

Why buy a small, traditional office building, when you could operate your business from this 1920s Tudor Revival?

Originally part of a 1920s neighborhood grocery store, this freestanding building, completely redeveloped in 2006, is now part of a small creative complex.

This is an extraordinary opportunity for someone who wants to live and work in Downtown Phoenix, all under the same roof or for a full blown Professional Office ie. Attorney, Lobbyist, Architect or ? You’re talking a renovated property here with hardwood floors, remodeled kitchen and bathrooms, 8 bedrooms and 2 bathrooms. A few of the bedrooms would serve as great conference rooms. Property is zoned R-5 and is within walking distance to Safeway, Starbucks & others to the North, Roosevelt Row to the South, Downtown Phoenix Public Library & Light Rail to the West.

Join other cool, successful businesses in the Coronado Historic District, building your dream facility on this commercially zoned lot just a few doors down from the Tuck Shop. Great place for an Architect’s office or live/work professional or neighborhood commercial retail operation.

Great opportunity for an entrepeneur who wants to be in the middle of the Grand Ave arts scene. This 3200 sq ft warehouse, built in 1947 is currently being used as an art space but you’re certainly not limited to that. The building features high ceilings and wooden trusses, 3/4 bath and a kitchenette. The property is on a 6600 + sq ft lot with C-3 Zoning.

Jackson Street warehouse gets a facelift

Not everyone is scaling back or closing up shop as evidenced by the renovation of this warehouse space at 22 E Jackson St, in the Downtown Phoenix Warehouse District. The new owners are renovating the building for use as their offices. As you can see from the exterior photo, they are in the process of exposing the brick. It’s really very attractive.

Here is a great opportunity for a creative entrepeneur who has a few bucks, to snag this Bungalow on a prime, highly visible corner in the heart of Roosevelt Row. Located at ground zero of the Downtown Phoenix art scene, this property is zoned commercial with on-site, paved parking behind the structure. Ideal place for a live/work gallery, restaurant, hair salon, professional office or ?

Downtown pharmacy set to open at CityScape next year

CVS Pharmacy will open a drugstore in downtown Phoenix’s CityScape complex, company officials will announce Wednesday. It would be the first time since 1976 that a pharmacy stood in the downtown neighborhood south of the Interstate 10.

The planned 13,000-square-foot drugstore could open as early as June 2010 on the southwest corner of Jefferson Street and First Avenue, said Michael DeNitto, a CVS regional director.

Jennings Strouss & Salmon PLC signed a lease with RED Development for 54,000 square feet in the first phase of CityScape, a three-block mixed-use project under construction in downtown Phoenix.

The law firm expects to move into the new office in June 2010. It is 20,000 square feet smaller than the space Jennings now occupies at the neighboring Collier Center.