Reflections: The Phoenix Chorale Looks Back Over 60 Years and Turns to the Future 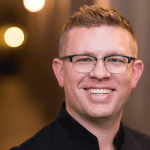 The Grammy-winning Phoenix Chorale is adding a creative twist to their search for a new artistic director.  The list of finalists is down to four, and each will lead a concert weekend during the Chorale’s upcoming 2018/19 60th Anniversary season. The following is the third of a series of introductory interviews by guest writer Katrina Becker. Images are courtesy of the Phoenix Chorale.

Titled “Reflections,” the program returns to the Chorale’s roots with John Rutter’s jazz-inflected Birthday Madrigals and other repertoire chosen by conductor Brian A. Schmidt. Of four candidates chosen as finalists for the Chorale’s artistic director position, Schmidt is the last to appear with the choir in a season President & CEO Jen Rogers describes as “such a ride and so much fun.” “The whole [artistic director search] process has been rewarding and cool,” says Rogers. “This is the next generation of great conductors and they’re already doing great things; each has a different set of skills.” She adds, “It’s going to be a really tough decision.”

“The process with the Phoenix Chorale started a year and a half ago — the longest job interview ever,” says Schmidt with a chuckle, “but I think they’re wise to take great care in planning for the future. They’re an organization with a great history.”

While creating the concert program, Schmidt used an invaluable Chorale database listing every piece of music sung by the ensemble since its inception. “We felt there should be some historical thread in the programming that paid homage to the Phoenix Chorale’s 60 years,” explains Schmidt. “And a significant amount of the music I’ve worked with in my career so far is by Johann Sebastian Bach.”

Baroque and early music played a vital role during Schmidt’s time working at Duke University, where he led the Duke Vespers Ensemble and the Bach Cantata Series with a period instrument ensemble at Duke Chapel. “I conducted a choir in weekly vespers services — amateur singers from every part of the university and community,” he says. “It was a great environment, and a real community connection…to be a living museum for historical music, where people could come interact with music throughout history.”

Unlike the cantatas, Bach’s motet Jesu, meine Freude is written only for voices, in five parts. It’s an eleven-movement work lasting around 20 minutes. “Bach juxtaposes chorale texts from a German hymn tune in the Lutheran tradition with Scriptural texts from Romans using a lot of ‘I’ and ‘me’ language, which gives it a very personal feel,” describes the conductor. “It’s one of Bach’s most masterfully-woven compositions.”

The motet is also a musical palindrome, says Schmidt. “There’s a mirror in the middle, and every movement from the outside in is similar,” he elaborates. “So movement one and movement 11 are similar; two is similar to 10; three is similar to nine.” Schmidt sees this complex form as a representation of the program’s “Reflections” title — the motet reflects itself, and also reflects back to its performance 60 years ago by the original Bach & Madrigal Society.

“A major theme in the work is transformation,” Schmidt says. “Most of the movements begin in a minor mode and end in a major mode. It’s symbolism that things start a little dark, but there’s hope.” He continues, “Bach completely exposes all of our human weaknesses and fears, but he always resolves them and provides comfort.” After Bach’s motet comes Rutter’s Birthday Madrigals, chosen to celebrate both the Chorale’s original name and its anniversary. The composer used text from the Elizabethan era for his work, but the jazz-influenced music honors pianist George Shearing, for whose 75th birthday the Madrigals were written. “They sound kind of like mid-century radio music,” says Schmidt. “They’re jolly and joyful and thoughtful compositions with complex harmonies and rhythms, but I think they play to the Chorale’s strengths in terms of the color and clarity of their sound.”

Since the Chorale has also championed and commissioned new music, the program includes contemporary works in sections subtitled “Light” and “Joy.” A spiritual arranged by University of Nebraska assistant professor Marques L.A. Garrett has “a fresh take with a lot of movement,” says Schmidt, while others set by Swedish jazz saxophonist Anders Paulsson have “tons of color and dense sound textures,” according to the conductor. “They’re familiar songs brilliantly arranged.” Lux Aeterna (Light Eternal) by Paulsson’s fellow countryman, the American-born composer Steve Dobrogosz now living in Sweden, sounds “very film-score with a jazz feel,” Schmidt explains. “The whole piece becomes the theme that represents the whole meaning of the text at once. So if you have a word that means ‘light’ maybe you don’t have a bright chord there, but the melody of the entire phrase colors it in a certain way. It’s beautiful and different.”

The Arizona premiere of Enrico Miaroma’s Light showcases a jubilant, sparkling setting of verse by 1913 Nobel Laureate Rabindranath Tagore, and Reena Esmail’s Tuttarana embodies “a mash-up of traditional Hindustani music style and her own spin on it with a more Western organization of those ideas,” says Schmidt.

Schmidt grew up in a southern Minnesota farming family, and studied agronomy before switching to music at South Dakota State University. “My dad and mom sang in church choirs and encouraged us to take piano lessons, so music was always part of my life,” he says, “but it had never occurred to me that it could be a career until I was a couple years into college, singing in a choir.” Schmidt founded the Dakota Men’s Ensemble after graduation. “It was my first place to start learning about repertoire and leadership and rehearsal management,” he says, “so it was a really formative experience for me.”

After earning graduate degrees from the University of North Texas, Schmidt founded the Grammy-nominated South Dakota Chorale (SDC), working at Duke and now serving as the ensemble’s artistic director as well as Associate Professor of Choral Music at Baylor University. “I’ve worked with the SDC for ten years now, and on that side of things I can see what a professional needs to get hired,” he says. “We can focus on conservatory-level training [at Baylor] but also make sure that we’re growing the human, the character, the person who can go out and be a good professional and a wonderful colleague, and carry kindness and compassion with a great amount of talent.”

The Phoenix Chorale and conductor Brian A. Schmidt perform “Reflections” on April 5, 6 & 7 in Sun City, central Phoenix and Paradise Valley. Tickets start at $35, with discounts for students, seniors and military, at phoenixchorale.org.