Faithfulness and Longing with the Phoenix Chorale 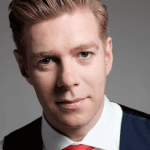 The Grammy-winning Phoenix Chorale is adding a creative twist to their search for a new artistic director.  The list of finalists is down to four, and each will lead a concert weekend during the Chorale’s upcoming 2018/19 60th Anniversary season. The following is the third of a series of introductory interviews by guest writer Katrina Becker. Images are courtesy of the Phoenix Chorale.

From spiritual transcendence to earthly romance, the Phoenix Chorale’s February concerts cover the range of sacred and human adoration.

“I looked for analogies of love and the idea of devotion,” says guest conductor Christopher Gabbitas. “Whether we’re devoted to our parents or our children, or to a sports team or a favorite artist,” he continues, “we have this idea of devotion and we feel a connection to the world around us.” He adds, “And on a personal level, choral music is something I’ve been devoted to for decades.” That’s no exaggeration; Gabbitas performed nearly 2,000 concerts over 15 years with elite choral ensemble The King’s Singers. Before joining the sextet in 2003 Gabbitas served as a lawyer for several years, although he never stopped singing.

Raised in the English boy chorister tradition, the baritone studied voice from the age of eight, continuing with music at St. John’s College, Cambridge. “I was getting the intellectual rigor from the law degree,” says Gabbitas, “and the other side of my brain was being energized through the choral scholarship.”

Thanks to his experience as an attorney Gabbitas brought a new level of legal and business acumen to The King’s Singers. He left the group last month and looks forward to a new position as Artist Professor at the University of Redlands in California, where he co-designed a master’s degree program merging both the art and the “nitty gritty” business of music-making. Gabbitas says students will learn diction, how to set up nonprofits, professional vocal performance, body mapping, and keys to commercial success.

Gabbitas is also a finalist for the position of Phoenix Chorale Artistic Director — he’s the third of four candidates to appear with the ensemble this season. Each finalist created a concert program with Chorale President & CEO Jen Rogers. “Christopher’s concert really encompasses the duality of choral music as sacred and secular,” she says. “The program spans 500 years, so that captures a core piece of who we are as an ensemble.”

“It felt like quite a personal labor of love for me to come up with this program at such a turning point, where I’m stopping this life of an itinerary touring musician,” says Gabbitas. “It was a real eye-opening experience for me — hence the idea of a pathway of devotion, an ongoing process of travel.”

“In many ways the repertoire has its roots in my formative years as a boy chorister,” he continues. “It starts with a piece by Henry Purcell, one of the masters of the English pre-Baroque in the 17th century: ‘Hear my prayer, O Lord, and let my cry come unto thee.’”

Gabbitas explains, “Purcell builds it from a lone voice, almost like a plainsong intonation, and the eight voices come in one by one. It reaches an extraordinary climax toward the end — an incredible suspension before the final resolution.” He continues, “It encapsulates so much yearning and pain and hope and excitement…a dozen emotions in one.”

Two different settings of a Palm Sunday text act as bookends for the breathtaking Ave Maria written by 16th-century English composer Robert Parsons, who was likely employed in the Chapel Royal. “This is the most perfect outpouring of religious fervor,” says Gabbitas. “It’s got what I think is the most beautiful ‘Amen’ written in the Renaissance period — it starts so simply, and it unfolds through the parts, and crescendoes and grows and stretches to just the most unbelievable conclusion.” “When I started programming I listened a lot to old recordings of the Chorale and tried to get into their sound texture and how they create their musical structure,” recalls the conductor. “I could immediately hear them singing this ‘Amen.’ I think that what they’re going to make of it is going to be truly extraordinary…and I’m going to be standing in front of them beaming like an idiot,” he concludes with a laugh.

The Chorale turns next to My Heart is a Holy Place, a hypnotic, meditative work by American composer Patricia Van Ness. “She wrote the text and the music,” says Gabbitas, “and it’s a very simple, still piece written over a ground bass on whole notes.” He sings F, E-flat, D-flat, C. “Then above them the other voices weave in and out.” Gabbitas adds, “It’s this idea that the heart is the beating center of life, the essence of who we are as humans.”

My heart is a holy place
Wiser and holier than I know it to be
Wiser than my lips can speak
A spring of mystery and grace.
You have created my heart
And have filled it with things of wonder.
You have sculpted it, shaped it with your hands
Touched it with your breath.

“Musically, I love descending bass lines because I find them to be grounding,” says Van Ness. “The soprano’s melody hovers above that repeating bass line at an interval of the 10th, to me an interval so pure and deeply moving that I try to use it often in my music.”

Van Ness originally wrote the work in 2000 for her church and titled it Cor meum est templum sacrum, using English and Latin. She reworked it for The King’s Singers, adding a counter-melody to showcase the middle voices. “This piece was one of those happy ones that seem to be created in a moment, quickly and easily,” she says. “The text was inspired by a growing conviction that we are filled with goodness, even if we are not aware of it or choose to ignore it.” She adds, “It’s no longer a growing conviction; I feel sure of it now.”

The program segment titled “Vision of Heaven” features music by Felix Mendelssohn, Arvo Pärt and William Henry Harris. “The Chorale sings German very nicely, with bright vowels,” says Gabbitas, “so I’m really excited to work with them — to be as light, and focused on their cheekbones, and lifted as possible with the text.” Later used in the oratorio Elijah, Mendelssohn’s work (Denn er hat seinen Engeln befohlen, He shall give his angels charge over thee) “perfectly captures this amazing vision of Heaven,” says Gabbitas, “with the angels soaring above and mankind below in anticipation, and then they all come together at the end.”

Gabbitas and the Chorale finish exploring spiritual devotion with León, written by Joby Talbot to describe one of the stops along the Camino de Santiago, the ancient Catholic pilgrimage through Spain. Insistent and mesmeric, León comes from Talbot’s larger work Path of Miracles.

“This is the focal point of the program to me,” says Gabbitas. “The Chorale hasn’t sung it before, and I know it’s going to give them the chance to shine as individuals. They’re going to have to sing as beautifully and soloistically as they can but within the context of the choral ensemble. I’m really excited to let them stretch their legs and see what they can do with this piece.”

The program turns to romantic love with two valentines from composer Libby Larsen, beginning with love from afar (In the Still Garden) and then continuing to the Shakespearean text of Will you, nill you from The Taming of the Shrew.

Ēriks Ešenvalds wrote the sweetly reminiscent Only in Sleep using a poem by Sara Teasdale. “I wanted to acknowledge and honor the American artistic tradition — we’ve got Libby Larsen, we’ve got Patricia Van Ness, we’ve got writings of Teasdale,” says Gabbitas.

“With this piece it’s an old lady in the waning years of her life, and she’s reliving experiences in her mind,” he continues. “The chorus acts as sort of angels of dreams or the whispering memories that are supporting the main text and the solo.”

Familiar and well-loved folk songs wrap up the Chorale’s program. Barbara Allen provides a musical link between England and America for the choir and for the conductor’s personal journey, followed by Scarborough Fair, Con amore, la mi madre, She’s Like the Swallow and Mairi’s Wedding. “What better way to end a concert about devotion than with a wedding feast, a joyful celebration?” asks Gabbitas with a smile.

“When I listen to ensembles I find it quite transcendent,” he says. “It can be an extraordinarily transporting experience to listen to human voices singing together. I think it’s that choral team feeling, the overtones and the harmony…the power and strength you can get from voices when they’re truly singing together for each other.”

The Phoenix Chorale and conductor Christopher Gabbitas perform Pathways of Devotion in Sun City and Phoenix from February 22-24. Find more information at phoenixchorale.org.