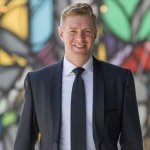 A brisk English breeze blows into the Valley as the Phoenix Chorale welcomes new Artistic Director Christopher Gabbitas, who comes to the ensemble after 15 years as a baritone with The King’s Singers. “I’m so thrilled to have been appointed,” says Gabbitas. “It doesn’t feel quite real yet.”

Gabbitas enthusiastically delivers his plans rapid-fire. “Because it’s my first role of this type, I think I’ve got a lot to give,” he says. “There’s music The King’s Singers couldn’t sing — it was six guys, and so there was a lot of repertoire we couldn’t do. I’ve had a bucket list of repertoire, concerts, concepts and program ideas I’ve kept on the back burner,” he continues, “knowing that I wanted to conduct full-time.” He looks forward to building on the Chorale’s many strengths with his own experience, which includes not only extensive touring and recording but also several years serving as a lawyer. “I’ve been very fortunate in having performed 2,000 concerts worldwide,” Gabbitas says. “Allied with that, I’m a qualified attorney, so I know what to look for in a recording contract and a management agreement.” He adds, “I’ve seen both sides of the fence; I’ve looked after artists and negotiated contracts, and I’ve also been an artist. I think that knowledge is a huge benefit to the Chorale.”

Gabbitas recently began serving as Artist Professor at the University of Redlands in California, helping design a master’s degree program merging choral and business studies. “We’ll have a consort of 16 students,” he says, “and the opportunity for them to collaborate with Phoenix Chorale– and for Phoenix Chorale to do a bit of work in California — is enormous. I’m looking forward to doing some major oratorio work with orchestra…wonderful large-scale choral works,” Gabbitas continues, “I’ve got ideas for the next two or three seasons, some of which will be mixed media — I might involve dance, film and projection, and all kinds of projects, just to reach out to new audience members. I want to be a really willing collaborator across the musical scene in Phoenix.”

“We’re having this first Valley Sing [on February 20, 2020], which is the idea that anybody who wants to sing can come along and we’ll spend two or three hours rehearsing and singing together,” says Gabbitas. “We’d like to celebrate the joy of singing with people, and hopefully set the Chorale at the forefront of being ambassadors for singing and choral music across the Valley and beyond.”

“Lux Aeterna — ‘heavenly light, light perpetual’ — is a quote from the Latin Catholic Requiem Mass,” Gabbitas says, “and that’s partly why we’re presenting Gabriel Fauré’s wonderful Requiem in the second half, which I know the choir will sing beautifully. It fits their style and their sound fantastically.”

But the concert is also “a tribute to service and patriotism,” he explains, “because 1919 was when the first World War properly ended with the Treaty of Versailles. With this centenary concert,” Gabbitas continues, “I thought about what we do for our country…but also the idea that we have this great belief of what happens after death.” The program begins with a vocal arrangement of “Nimrod,” the most famous of Sir Edward Elgar’s beloved orchestral ‘Enigma’ Variations. “John Cameron is an arranger who’s put the words ‘Lux aeterna’ to that music,” says Gabbitas, “and I think it’s going to be a very powerful way not just to start that particular concert but also to start my tenure, and to start this next chapter in the Chorale’s history: [with] peace and light and harmony…both literal and metaphorical harmony.”

Schuman, known for his opera The Mighty Casey and his New England Triptych, died in 1992. “He lived through both World Wars, the Great Depression…and lots of incredibly important things in American history,” the conductor says. “He was a deeply thoughtful man…even the fast sections within his writing must appear to flow and sound quite simple. You’ve got to think about the big picture, and keep your breathing and your pacing and your relaxation.” Schuman’s Carols of Death are “wonderful pieces of music,” Gabbitas continues, “really lovely, unique choral writing…I’m looking forward to unpacking those.”

British composer and baritone Roderick Williams wrote Everyone Sang in 2016 for The King’s Singers, incorporating not only the eponymous war poem by Siegfried Sassoon but also text from the Agnus Dei and words by Laurence Binyon from “For the Fallen”:

Everyone’s voice was suddenly lifted;
And beauty came like the setting sun:
My heart was shaken with tears; and horror
Drifted away…

They shall grow not old, as we that are left grow old:
Age shall not weary them, nor the years condemn.
At the going down of the sun and in the morning
We will remember them.

“He melds things together using a sextet and then a chorus of singers,” describes Gabbitas. “These are very famous and poignant words which are read every Remembrance Day — which is your Veterans Day — here in England.”

The contemplative mood continues with two penitential motets by Francis Poulenc, a 20th-century composer who renewed his Catholic faith with a pilgrimage to Rocamadour in the south of France.

After intermission the Chorale returns with Gabriel Fauré’s music, featuring organ accompaniment and soloists from the Phoenix Boys Choir on the Pie Jesu. “There’s something about the purity of a treble voice which I think suits that movement brilliantly,” says Gabbitas. “Fauré focused on the idea of eternal rest and consolation. The Requiem was a complete outpouring of the essence of his religious being.”

“I feel so honored to be working with amazing musicians,” Gabbitas continues, “because the Chorale makes a beautiful sound…they’re a professional choir, but they are a choir of and from the community, and for the community. And I know they have busy lives and they’re professionals in their own right, and they choose to come together and sing.” He adds, “That’s incredibly powerful, and it’s actually quite rare — you don’t often come across ensembles with that level of joy for what they do.”