Mixing Centuries with the Phoenix Chorale 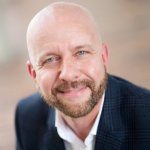 The Grammy-winning Phoenix Chorale is adding a creative twist to their search for a new artistic director.  The list of finalists is down to four, and each will lead a concert weekend during the Chorale’s upcoming 2018/19 60th Anniversary season. The following is the second of a series of introductory interviews by guest writer Katrina Becker. Images are courtesy of the Phoenix Chorale.

Combine the loveliest choral music of the mid-19th century with fresh songs from composers born in the mid-20th century and you’ll find the formula for the Phoenix Chorale’s “Mid-Century Modern” program, coming to Sun City, Phoenix and Paradise Valley near the end of October.

From tender and tragic to jubilant and whimsical, the repertoire was chosen as a nod to 1958, when the Chorale was founded as the Bach and Madrigal Society.

“The idea of Mid-Century Modern is something I’ve been wanting to do for a while,” says conductor James K. Bass, one of four finalists in the Phoenix Chorale’s search for a new artistic director. Bass will lead the Chorale in rehearsals and concerts for this program, meeting with the ensemble’s board, staff, singers and community. “One of the things I really wanted to do was celebrate the idea of the Phoenix Chorale and its inception,” he says. “This is the 60th anniversary year, and I think that’s something to be absolutely celebrated.” Bass continues, “So I thought, ‘What if we build a program around composers who were writing or born right around the time the group was being formed, which happens to fall right in the middle of the Mid-Century Modern architectural era?’”

“I didn’t want to only do a program of 20th-century music, so the play on words is that the ‘Mid-Century’ is the middle of the 19th century in the first half [of the concert], and the ‘Modern’ is the composers and works that have been written within the lifetime of the Phoenix Chorale,” he explains. “My aim is to show how much choral music has evolved in just that 100-year period, which is fascinating.

Bass is a three-time GRAMMY®-nominated singer and conductor who currently serves as Professor and Director of Choral Studies at UCLA’s Herb Alpert School of Music. He’s also Artistic Director of the Long Beach Camerata Singers, Associate Conductor and Director of Education for the ensemble Seraphic Fire, and a performer with the Santa Fe Desert Chorale, Conspirare, and True Concord, a choir based in Tucson. With Seraphic Fire he created the Professional Choral Institute at the Aspen Music Festival.

“I started out as a double-bassist, and then I joined the choir at Interlochen Arts Academy for social reasons,” he reveals with a smile. “Once you get the elixir of vocal music and you’re around singers…I just loved the idea of the marriage of word and voice.” The first half of the “Mid-Century Modern” program is bookended by the music of Felix Mendelssohn, beginning with the celebratory Jauchzet dem Herrn, alle Welt (Shout to the Lord) from Psalm 100.

“One of the things I treasure about Mendelssohn is that he wrote so perfectly for the instrument of the choir,” says Bass. “He uses the men’s voices as a single choir and the women’s voices as a single choir, so you get this incredibly beautiful HD kind of audio effect.” He adds, “A choral shout for joy; what a great way to open the concert, to hear the Phoenix Chorale make these spectacular sounds.”

Three songs by Johannes Brahms use the piano as an equal partner to the choir, and Charles Villiers Stanford’s The Blue Bird creates a musical snapshot — “an aural representation of a visual image,” says Bass, who ends the first half with Mendelssohn’s penitential Mitten wir im Leben sind (In the midst of life). In a letter to his sister the composer described it as “one of the best church pieces that I have written…[it] growls angrily, or whistles dark blue.”

The Chorale moves into the modern with composer Wolfram Buchenberg. “In the score he writes ‘as if from another sphere,’” Bass says. “As a musician, how do you accomplish that?” He adds, “Here’s a composer born in 1962 in Berlin just a few years after the beginning of the Phoenix Chorale, using the same language [as Brahms and Mendelssohn], but the music will sound so immensely different.”

James Syler, born one year earlier, sets an intimate, poignant letter from the Civil War in Dear Sarah. “Often we’re interpreting poetry, and poetry of course has many interpretations,” Bass explains.”But this isn’t a poem. It’s as if you’ve been allowed to look in someone’s private diary — it’s very direct, and so moving to hear this man’s love for his wife.”

On a lighter note, innovative composer Paul Crabtree created the whimsical Romantic Miniatures (from The Simpsons) with a nod to the yellow-hued characters in the long-running subversive animated Fox Television series.

“I was actually right at the beginning of my compositional career,” says Crabtree. “I used to watch The Simpsons on a regular basis, and I noticed these little texts fly by.” He continues, “On further investigation they’re just so beautiful and so touching that I thought they’d really be good as choral settings for an eight-part choir.” Marge and Homer of The Simpsons.

Like most fan fiction, the Miniatures aren’t officially published; the composer sends them out on request but cautions, “Even though the vocal lines themselves are quite easy — they’re very horizontal — when you fit them with other voices they become quite difficult.”

The composer pauses. “That’s really a fantastic confession,” he says with a chuckle. “I’ve often thought that it belongs in the wedding service, because it’s so tender, and it’s also so human and so true.” Crabtree adds, “When my partner and I got married a few years ago I actually used those as the vows. It just seems so quintessentially perfect.”

“[Miniature] Three is the one that gets the big laughs because that’s Marge, you make the best pork chops,” he continues. “It’s set very low in the register…it’s kind of…what’s the word? Gastro-porn.” Crabtree laughs. “Homer’s really gurgling — you can hear him smelling these pork chops, and then the whole choir descends slowly into this guttural ‘Ohhhhh, pork chops.’”

“And then the first miniature is very tender and touching because it’s Grandpa, who is out on a date, and he realizes that he’s falling in love,” says Crabtree. “And he says, ‘You remind me of a poem I can’t remember, and a song that may have never existed, and a place I’m not sure I’ve ever been to. I feel all funny.’ He realizes, ‘I’m in love!’” The composer adds with a smile, “The episode actually goes on immediately after, and he says, ‘No, wait — it’s a stroke!’…but I left that bit out.”

“Mid-Century Modern” ends with a suite from Dan Locklair’s changing perceptions, a prize-winning composition exploring the idea of death using poetry by Arizonan Carol Adler. “There’s a little bit of humor at the end to let the audience off,” says Bass.

The Phoenix Chorale performs “Mid-Century Modern” in Sun City on Oct. 26, in downtown Phoenix on Oct. 27, and in Paradise Valley on Oct. 28. Find more information and purchase tickets at phoenixchorale.org.