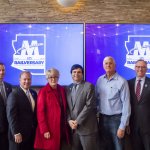 Wire*—Valley leaders past, present and future gathered to kick-off Valley Metro Rail’s 10-year anniversary, also known as the “Railversary.” Valley Metro CEO Scott Smith welcomed a prestigious slate of speakers, including rail city mayors, who shared the transformation that has occurred in their cities over the past 10 years.

“Since light rail opened, we’ve transformed from a quiet downtown into a bustling hot spot for innovation, education and business,” said Phoenix Mayor and Valley Metro Rail Board Chair Thelda Williams. “Thank you to our early rail champions. You’ve changed the trajectory of the Valley forever.” “The people who worked with me did the heavy lifting, including the business partners who really made it happen,” said Rimsza. “We worked together…the cities of Phoenix, Mesa and Tempe.”

Along with public sector support, investment from developers helped boost the transformation of communities near light rail. According to the Quality of Life impact report, there has been $11 billion of investment and 35,000 jobs created within one-half mile of the 26-mile corridor. The report also focuses on how light rail contributes to fostering community health and connecting communities.

“Light rail gives families the freedom of transportation mobility without all the costs of owning one or even two cars,” said Diana Yazzie Devine, President/CEO of Native American Connections. “That means families have greater housing stability with more disposable income for taking care of their family’s basic needs and enjoying a better quality of life.”

A highlight of the program was a tribute to the late Congressman Ed Pastor.

“This light rail system is Ed Pastor’s legacy,” said Smith. “He understood both its value to our communities and the great opportunity it offers.”

Smith closed with a surprise announcement of free rides on December 27 that will take the public to a Railversary celebration, 5-10 p.m. at Talking Stick Resort Arena.

In this story: city of phoenix, Light Rail, Valley Metro