Marco Bianco, the Man Behind the Bread 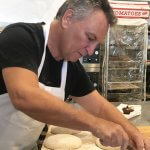 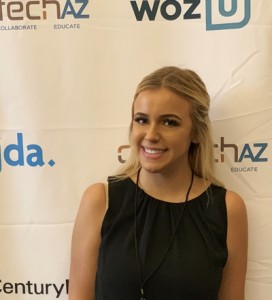 Marco Bianco watches dough like a surfer watches a wave.

“I like to think of dough rising as a wave. If I wait too long, and the wave rises too high, I won’t be able to surf it,” second generation, Italian-American Bianco said. “If the dough is above or below the correct temperature, or it rose for too long, I just missed its perfect peak time.” Bianco makes dough and bakes bread for his brother Chris’s four Phoenix restaurants: Pane Bianco, Tratto and two Pizzeria Biancos. He followed Chris from New York 23 years ago. He began in the front of the house putting pizzas together during lunches.

Longtime friend and coworker Dave Garland said Bianco would sit there and try to make these pizzas perfect when it was busy.

“We would literally have to take the pizzas out of his hands and pass it down because the line was out the door,” Garland said.

Since Bianco moved from the front line to being the baker, he said the most important thing when preparing the dough is time and temperature. When there is dough that is past the correct rising, he said he makes it into bread pudding, crumbs for meatballs and even French toast.

“I always try to find an alternative to use the waste,” Bianco said.

Bianco said his baking style is carefully calculated. He said he modifies the water temperatures in the dough and the air conditioning in the room to make sure that everything is correct in his equations.

“Dealing with nature, you have to find the sweet spots. Consider the shape,” Bianco said. “I want to be the guy who makes your favorite parmesan cheese. You don’t know who made it, but you love it.”

Bianco said he is still learning new techniques everyday. He said he wants to make more of a nutritious bread. Bianco is also a part of the Bread Bakers Guild of America and has taught classes for other bakers.

“When I first started, I had no idea what I was doing, but the more I studied and learned the scientific side, the better the bread was,” Bianco said.

Bianco said he doesn’t mind being in the background because he enjoys helping his brother and simply baking. “I watch my brother’s back, I follow his lead,” Bianco said. He oversees everything to make sure it’s just right.

When he’s not baking, Bianco hikes on his off days and said he loves to travel. He has been to Italy more than 20 times. And when he does travel, he said he likes to visits bakeries to see other methods.

“Sometimes I would wake up before everyone else and go to this little family owned bakery in Italy and just look around. I would buy everyone a pastry before returning home, but it was always so interesting to see how others bake,” Bianco said.

He proposed to Francesca, his wife of two and a half years, on Wind Cave Trail in Arizona. Since they’ve been married, Bianco said he tries to leave the cooking at home to her.

“When we do cook together at home, it’s more of a fun thing we have always liked to do together. We have this great friendship outside of our marriage and its one of the things we enjoy doing together,” Francesca said.

Garland, who started at Pizzeria Bianco at the same time as Bianco, said, “Marco actually taught me how to ski. Marco kind of breaks everything right down to the origin. He’ll start by talking to you about skiing then all of a sudden you’re talking about the Eskimos and who the first people were to put two pieces of wood on their feet.”

Francesca said when her husband doesn’t know much about a topic, he will research it until he can master it. She enjoys the research and learning new things with her husband. Francesca said she agreed with Garland, that once somebody gets Bianco started talking about one subject, he won’t be distracted by anything else.

Bianco didn’t start as a baker, he graduated from college with a degree in graphic design. He also wrestled in college. All these components helped him become the baker he is today, from kneading the bread to putting equations together for the correct temperatures and timing.

“I think I have a great job,” Bianco said, “but I think in my next life, I would want to be a biochemist.”