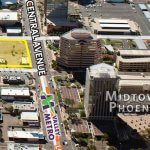 The venture, formed by Fore Property Co. and HQ Capital, plans to develop a 223-unit luxury apartment community in the Midtown Phoenix location. EDI International is designing the project, which will feature four stories of residential units on top of two levels of parking. The multifamily project will offer studio, one- and two-bedroom units ranging from 600 square feet (sf) to 1,500 sf, with rental rates projected to run from $1,200 to $2,500. Fore Construction is to serve as the contractor with construction scheduled to start mid-2018, with opening anticipated year-end 2019.

“Midtown Phoenix has transformed into an exciting live-work-play location, and this light-rail served site will thrive as a luxury high-density residential development,” said Nicoluzakis.