Who You Callin’ Ugly? 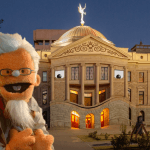 Did you hear the one where Arizona’s State Capitol was deemed the ugliest in the nation? Yep, in all the 50 of these great and somewhat united states, Thrillest ranked our very own at the “top” of their list.

When a piece of Arizona history comes under attack, who better than Marshall Shore, Hip Historian, to lead the response.

“I knew writing a letter or sending an email really wouldn’t do it justice,” said Shore. So of course, Marshall being Marshall, he gathered friends to create an animated video featuring puppets to provide the perfect retort. The idea spawned from a gift Shore received for his 50th birthday from Phoenix’s very own Stacey Gordon of Puppet Pie, and Sesame Street, fame; a puppet made in his likeness.

His friend Dr. David Bolman of University Advancing Technology (UAT), came up with the idea of using CGI to animate a building. When the Marshall read about the slight against the Capitol, he knew this was building that had something to say. With Stacey offering her services as the puppeteer, all that was needed was a photo and a voice.

“We needed an image that we had the rights to, so I called Marilyn Szabo,” said Shore. “She and I got up early one morning, and went out on a photo shoot of the Capitol. To get that photo we were there before the sun came up.”

“My friend Greg Lutz does a lot of voiceovers and acting work,” Shore continued. “I left him a message asking him what the capitol would sound like. He called me back as the Capitol.”

Shore and Lutz wrote the script and recorded the voiceovers at UAT. They brought in Gordon and, with the help of Bolman and other UAT staff, they were able to produce this amazing video.

We challenge anyone after watching to come away thinking state 48’s Capital Building doesn’t stand shoulder to shoulder with its counterparts.