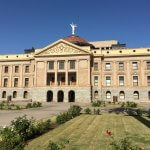 The Arizona Capitol Museum and Guild (AZCM) will offer free, special one-hour tours of the capitol building and the grounds surrounding it on a few Saturdays in March and April. The next tour is Saturday, March 25 at 10:30 a.m.

These tours are different from the traditional tours in that participants learn about the construction of the Territorial Capitol, the development of its grounds and how that story relates to Arizona’s and the City of Phoenix’s own developments. The tour begins outside the building in what was once an alfalfa field and then a grassy park that Phoenicians visited before the Territorial Capitol was constructed. Inside, tour guides will examine the architecture of the building, which was designed by James Riely Gordon, and the modifications that have been made to it over the years. Guides will explain how the building has been preserved over the years and how the museum inside it has become one of Phoenix’s Points of Pride.

If you’ve ever wondered why the capitol dome wasn’t originally made of copper, why the grounds have a Chinese bamboo forest or if there really were bullet holes found in Winged Victory, which sits atop the capitol dome, all these questions and more will be answered during this tour of Arizona’s historic capitol and grounds tour. What: Special Tour of Arizona’s Historic Capitol and Grounds
Where: Arizona State Capitol, 1700 W Washington St.
When: Saturdays March 18 and 25, April 1 and 8 at 10:30 a.m.
Tours are free of charge.